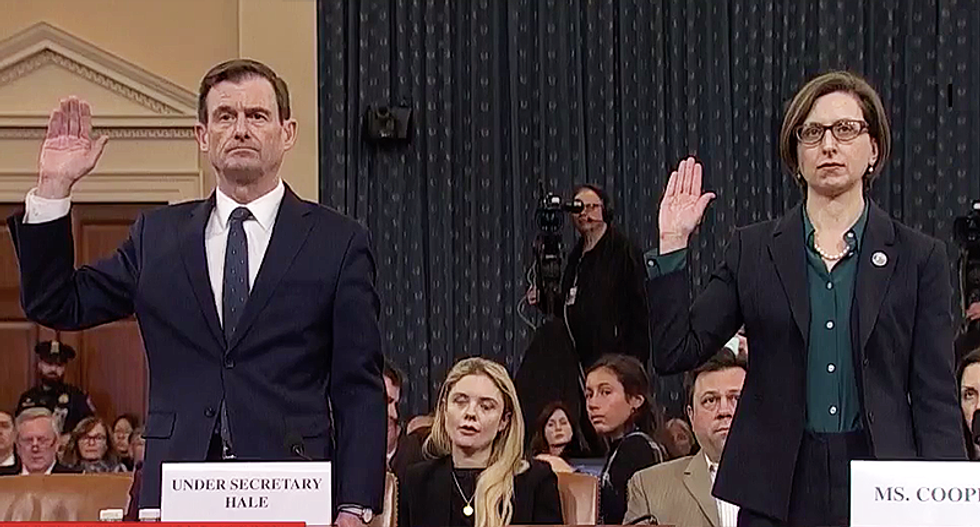 During the impeachment testimony of State Department officials Laura Cooper and David Hale, Rep. Eric Swalwell (D-CA) used his time to dismantle a growing defense of President Donald Trump's apparent use of Ukrainian foreign aid for an extortion scheme: that Obama didn't give Ukraine aid either, so Trump didn't even have to.

Sir, I don't have that figure," said Cooper. "The figure that we typically use is to say we've provided $1.6 billion to date, but I don't have the breakdown in front of me."

"And the Obama administration also trained five military battalions of the Ukrainians, is that correct?" Swalwell added.

"Again, I don't have the figures in front of me, but yes, the training program began in the Obama administration, and we did train many forces," said Cooper.

"Those all sound like pieces of equipment that were provided in the Obama administration, to my recollection," said Cooper.

"You would agree that's a lot more than blankets, right?" asked Swalwell.

"Ambassador Hale, the aid that was withheld to Lebanon and Pakistan [under Obama], those were for legitimate foreign policy objectives, is that right?" continued Swalwell.

"And you would agree that withholding aid to investigate a political opponent is not a legitimate foreign policy objective, is that right?" added Swalwell.