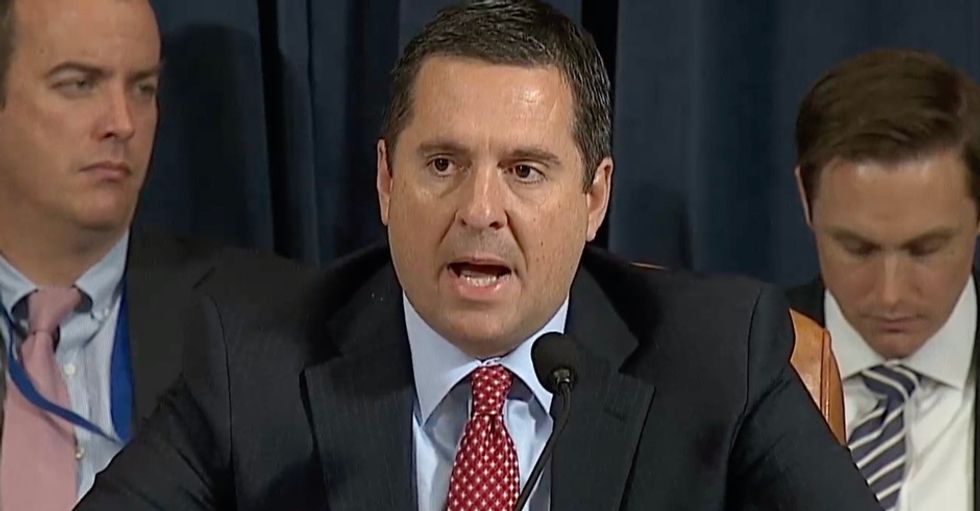 Intelligence Committee Ranking Member Devin Nunes (R-CA) in his opening remarks on the first day of public witness testimony in the impeachment inquiry of President Donald Trump, charged House Democrats with wholly debunked conspiracy theories. Among them, that Democrats – not Donald Trump – colluded with Russia, and Ukraine, not Russia, attacked the 2016 U.S. elections. Also, that Democrats, not President Trump, committed wrongdoing against Ukraine.

So, Nunes is claiming (falsely) that Democrats both colluded with Ukraine and attacked Ukraine (video below.)

“Democrats have a long habit of accusing Republicans of offenses they, themselves, are committing,” Nunes claimed. “For years they accused the Trump campaign of colluding with Russia when they themselves were colluding with Russia by funding and spreading the Steele Dossier that relied on Russian sources. And now they accuse President Trump of malfeasance in Ukraine, when they, themselves, are culpable. The Democrats cooperated in Ukrainian election meddling,” Nunes charged.

Literally every word is a lie.

Remember that the U.S. Intelligence Community unanimously decreed that Russia attacked the 2016 U.S  elections. That fact was once again proven during the Mueller investigation, and in the Mueller Report. There is literally zero proof of Nunes’ claims.

Nunes, who may be best remembered for his dramatic dark of night visit to the White House in 2017, where he was given information by the Trump administration only to claim it was from a secret source. That information was falsely framed to suggest (wrongly) the Obama administration had illegally investigated the Trump campaign.