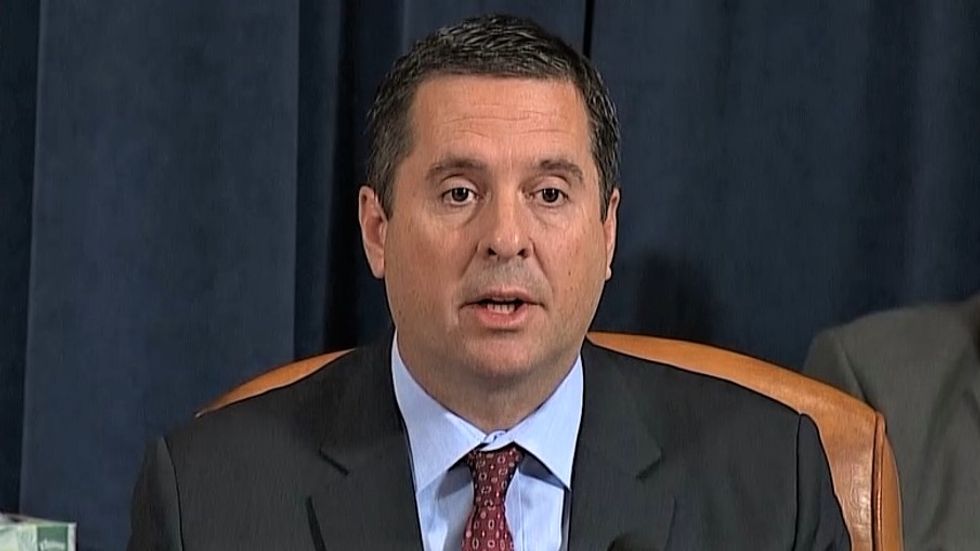 On Thursday, ahead of testimony from National Security Council official Fiona Hill in the impeachment proceedings, Rep. Devin Nunes (R-CA) unleashed a tirade of nonsense in his opening statement, claiming that President Donald Trump is being punished for a "thought crime," and listing off a bunch of false attacks on Democrats.

"President Trump, we are to believe, was just about to do something wrong, and getting caught was the only reason he backed down from whatever nefarious thought crime the Democrats are accusing him of almost committing," said Nunes. "I once again urge Americans to continue to consider the credibility of the Democrats on this committee who are now hurling these charges. For the last three years, it's not President Trump who got caught, it's the Democrats who got caught."

"They got caught falsely claiming they had more than circumstantial evidence that Trump colluded with Russians to hack the 2016 election," Nunes whined. "They got caught orchestrating this entire farce with the whistleblower and lying about their secret meetings with him. They got caught defending the false allegations of the Steele dossier which was paid for by them. They got caught breaking their promise that impeachment would only go forward with bipartisan support because of how damaging it is to the American people. They got caught running a sham impeachment process featuring secret depositions, hidden transcripts and an unending flood of Democrat leaks to the media. They got caught trying to obtain nude photos of President Trump from Russian pranksters pretending to be Ukrainians. And they got caught covering up for Alexandra Chalupa, a Democratic National Committee operative who colluded with Russians to try to smear the campaign by redacting her name from deposition transcripts and refusing to let Americans hear her testimony as a witness in these proceedings."

"That is the Democrats' pitiful legacy in recent years," Nunes added. "They got caught."