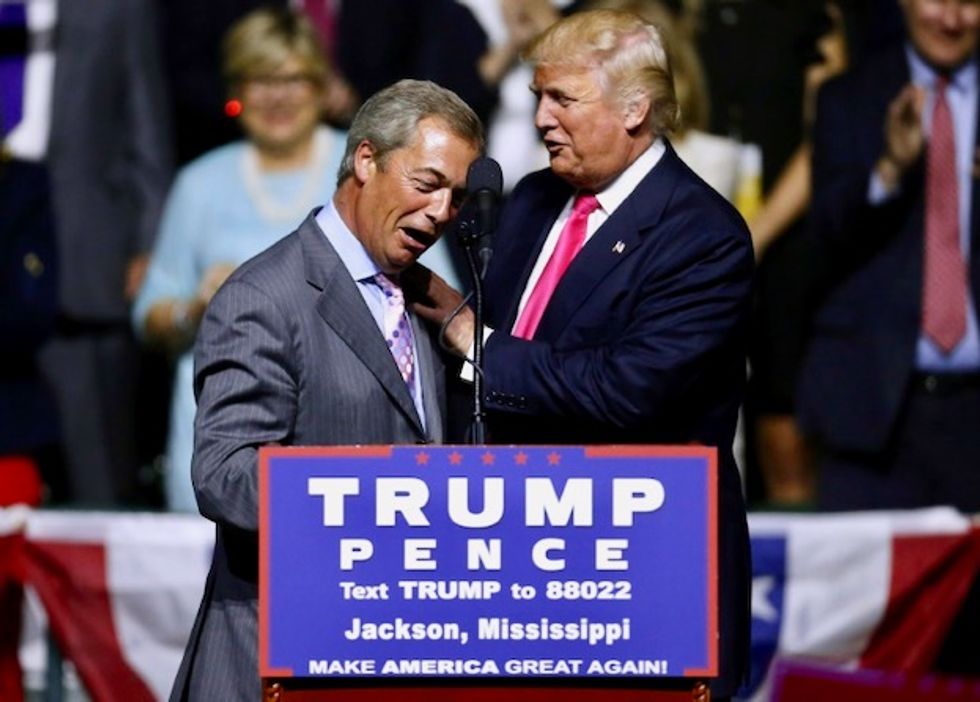 The US president used a lengthy appearance on Farage's radio phone-in show Thursday to share his characteristically blunt views ahead of the December 12 snap poll.

"I know that you and (Johnson) will end up doing something that could be terrific if you and he get together as, you know, an unstoppable force," Trump told Farage.

Trump also warned Johnson Thursday that the terms of his EU divorce deal meant that "under certain aspect... you can't trade" with the United States.

The US president's unannounced intervention turned into top UK news and put Farage in the headlines just as he launched his party's official campaign in London.

It also threatened to hurt Johnson at the outset of a campaign that has huge implications for Britain's future place in Europe and the rest of the world.

Both Trump and Farage are deeply polarizing figures in Britain who could hurt Johnson's chances with more moderate voters.

Johnson claims that his revised deal with Brussels will allow Britain to strike lucrative free-trade agreements with global giants such as China and the United States.

Johnson shot down Trump's trade warning, telling the BBC that his deal "enables us to do proper all-singing, all-dancing free-trade deals around the world" and dismissed talk of an alliance with Farage.

AFP / Ben STANSALL Farage on Friday: 'A non-aggression pact of this kind would work'

"The difficulty about doing deals with any other party is that any other party, I'm afraid, simply risks... putting Jeremy Corbyn into Number 10," he said.

But Farage seized on Trump's remarks and made several references to it at Friday's campaign event.

He urged Johnson to rip up his deal with Brussels and campaign with his Brexit Party for Britain to leave EU with no strings attached -- a prospect that frightens most businesses and the markets.

"If it was done, Boris Johnson really would get a really big majority. And on that manifesto, we really could get Brexit done -- in fact, to quote a friend of mine, we'd become an unstoppable force," Farage told his supporters.

Johnson has publicly resisted the idea of a tie-up with Farage.

The Brexit Party has seen its support slump to around 10 percent from the 31 percent it enjoyed when it won the largest share of British votes in European Parliament elections in May.

Farage argued that Johnson will need his help to win over Brexit-supporting voters who traditionally back Labour and reject the Conservatives for "cultural" reasons.

"It would be fair to say there are around about 150 seats in this country that are Labour Leave constituencies that the Conservative party has never, ever won in their history," he said.

Johnson's minority government currently holds 298 seats in the 650-seat lower House of Commons, forcing it to rely on smaller parties and independents for support.

But Johnson is eyeing an outright majority to make pushing through his Brexit deal easier.

The Conservatives' old alliance with Northern Ireland's Democratic Unionist Party (DUP) is in disarray because of sharp disagreement over the terms of Brexit deal.

The other smaller parties all back Europe and are more likely to try to form a coalition designed to stop Brexit.

Farage said there remained two weeks to put together a "leave alliance" but dismissed suggestions his party could split the anti-EU vote.

The party had the funding in place to "contest every single seat in England, Scotland and Wales" if Johnson turned him down.

"Please don't doubt we are ready," Farage said. "I hope that common sense prevails over the next new weeks."