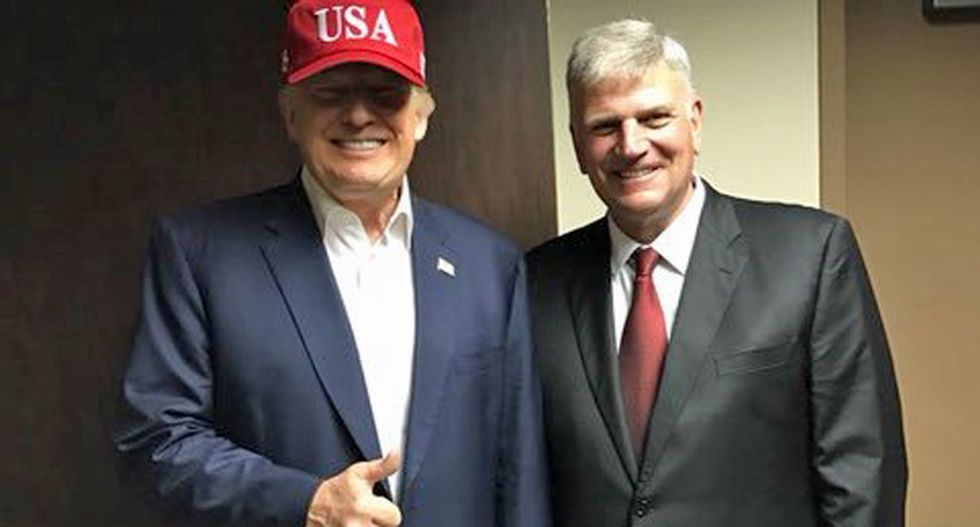 In the 1980s, the late Sen. Barry Goldwater — who was considered an arch-conservative in his day — famously asserted that the Republican Party was making a huge mistake by embracing the Christian Right, which he described as a “terrible damn problem” for the conservative movement. But President Donald Trump, on the other hand, enthusiastically welcomes the support of far-right white evangelicals — some of whom are declaring that the impeachment inquiry he is facing is against God’s will and that demonic forces are trying to remove the president from office.

On November 21, evangelist Franklin Graham (son of the late Rev. Billy Graham and a strident Trump supporter) discussed impeachment when he appeared on fellow wingnut Eric Metaxas’ radio show. Graham told Metaxas that it’s “almost a demonic power that is trying” to remove Trump from office — to which Metaxas responded, “I would disagree. It’s not almost demonic. You know and I know, at the heart, it’s a spiritual battle.”

When far-right evangelicals speak of a “spiritual battle,” they typically mean one between God and Satan — and clearly, Graham and Metaxas believe that Trump is working for God, while his political opponents are working for Satan.

Republican Rick Perry, secretary of energy in the Trump Administration and former governor of Texas, has also claimed that Trump is on a mission from God. Perry, during a recent appearance on Fox News, described Trump as “the chosen one” and claimed he has been “sent by God to do great things.”

Many of Trump’s critics have had a hard time understanding why he is so popular with the Christian Right, which wanted to see President Bill Clinton impeached in the late 1990s for having an extramarital affair with White House intern Monica Lewinsky. Trump, according to his former personal attorney, Michael Cohen, had extramarital affairs with a porn star (Stormy Daniels) and a Playboy model (Karen McDougal) and paid them hush money to keep quiet. But the Christian Right is extremist tribalist in its thinking; so, even though Trump has never been especially religious (he’s a non-practicing Presbyterian) and former President Barack Obama has a long history of going to church, far-right white evangelicals view Trump as an ally and Obama as an enemy.

Such tendencies were evident in October after the death of Rep. Elijah E. Cummings, who chaired the House Oversight Committee. Cummings was quite religious: his association with the New Psalmist Baptist Church in Baltimore spanned at least 40 years, and the Maryland Democrat would sing the Christian hymn “This Little Light of Mine” at civil rights marches. Yet some far-right evangelicals celebrated his death, insisting that God struck him down for opposing Trump.

Christian fundamentalist Stacey Shiflett, for example, said of Cummings, “Everything that he’s done has been nothing but trying to take this president out. I believe that God had had enough, and God moved.”

Hanna Selinger, in a November 26 article for The Independent, delves into the Christian Right’s unwavering adoration of Trump and explains why white Christian fundamentalists hold him in such high regard despite his not-so-Christian behavior.

“For evangelicals,” Selinger explains, “Donald Trump offers deliverables. The conservatives who follow the letter of the law when it comes to the Bible count among their most important issues ‘family values’: abortion, gay marriage, and so on. On these issues, Trump has offered a far-right tack. Despite who he actually is as a person, he checks the boxes — enabling evangelicals to look the other way and toward a perceived ‘greater good.’”

Christian Right voters, Selinger observes, “are willing to separate morals in a president from morals in a country. These voters will pull the lever for a man who prevaricates daily, who has had multiple wives and even more affairs. That’s because they believe that those characteristics outweigh the things they want done in Washington.”

Selinger adds, “Rick Perry is no different. He too is willing to overlook gross misconduct, of which he was part, simply because he likes the president’s policies.”

If a Democratic president had asked Ukrainian President Volodymyr Zelensky to investigate a political revival and made that investigation a condition of military aid, far-right theocrats like Graham, Perry, Metaxas and Liberty University’s Jerry Falwell, Jr. would be demanding his impeachment. But because Trump become an honorary member of the Christian Right, he gets a pass.

The Christian Right, Selinger asserts, is unlikely to turn against Trump.

“This is the problem with Trump and his allies, and it begins with religion: what it means to follow God has been lost in a political game that places legislative wins over moral losses,” Selinger writes. “Will evangelicals ever see the light? As Rick Perry demonstrates in his ruthless sycophancy, the odds are slim.”