Fox legal analyst: Today was a good day for anyone who wants to shorten the Trump presidency 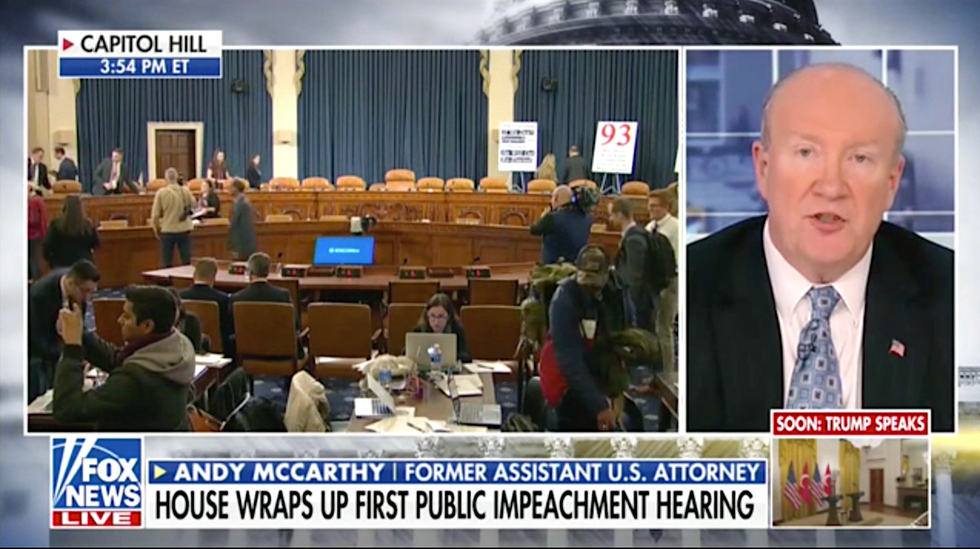 As the first public hearings in the House impeachment inquiry against President Trump wrapped up this Wednesday, former assistant US attorney and Fox News contributor Andrew McCarthy said that he originally expected Republicans' "best pitch" to be that the Democrats' impeachment inquiry hasn't demonstrated anything impeachable.

"Instead what they've tried to do is go at this by saying, 'Nothing bad happened, it was perfect,'" McCarthy said, adding that the latter tactic will open them up to an "itemization of a number of irregularities that happened and a lot of very admirable and articulate government witnesses getting on the witness stand to say, 'This shouldn't have happened, that shouldn't have happened, this is a departure from American interests, a departure from American norms.'"

"Politically, I don't see how that helps the President," McCarthy said.

"It doesn't mean he's going to get impeached," he continued. "But I've always thought, to the extent that you credit the idea that what the Democrats have wanted from day one is to paralyze and perhaps shorten the Trump presidency, and that the ultimate idea is to try to render him politically unelectable come the [2020 campaign], it seems to me that today is a good day for advancing that cause."

Watch the Fox News segment below: