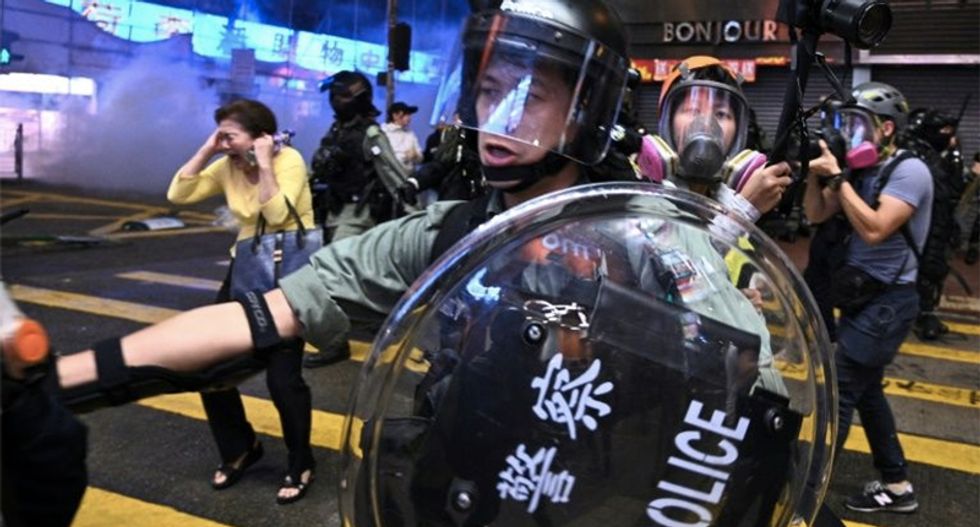 There had been disturbances in Hong Kong over the weekend, even before a protester was shot on Monday morning (Photo: AFP / Philip FONG)

China on Thursday accused the United States of seeking to "destroy" Hong Kong and threatened retaliation after Congress passed new legislation supporting the pro-democracy movement that has thrown the city into nearly six months of turmoil.

Foreign Minister Wang Yi said the passage of the Hong Kong Human Rights and Democracy Act "indulges violent criminals" that China blames for the worsening unrest and aims to "muddle or even destroy Hong Kong".

The legislation -- which now awaits President Donald Trump's signature into law -- backs universal suffrage, freedom from arbitrary arrest, and sanctions against those who contravene such principles.

It was passed by the House of Representatives on Wednesday despite warnings from China, which angrily rejects criticism of its handling of Hong Kong.

Hong Kong's months of protest began with a now-shelved bill to allow extraditions to mainland China, which revived fears that Beijing was slicing into the city's freedoms.

Millions of angry citizens have taken to the streets in giant marches, and protesters have repeatedly clashed with police in a movement that has widened to include calls for democracy and an inquiry into alleged police brutality.

The resistance has focused in recent days on the campus of the Hong Kong Polytechnic University, with fiery clashes that saw police firing tear gas and rubber bullets at protesters, who shot arrows and lobbed Molotov cocktails.

The university remained under siege Thursday, with dozens of holdouts in the movement's signature black colours defying official calls to surrender.

Hundreds have fled the campus out of fear or deteriorating living conditions this week, most of them quickly arrested by police on rioting allegations.

Exhausted protesters draped in gold and silver medical blankets continued to trickle out of Thursday.

But a 30-year-old masked protester who gave his name as "Mike" scoffed at surrendering, saying international and local pressure would cause authorities to make a humiliating "retreat".

"Please try! You're welcome (to storm the campus)," he told AFP, in a message to police.

"It will be a fun game of hide-and-seek."

"Police are making the wrong calculation here if they think we will surrender. We have plenty of resources, plenty of food and water. We can last a month."

In some areas, materials used for making Molotov cocktails were strewn about -- accompanied by warnings against smoking -- and graffiti was seen throughout the campus, including messages such as "You can kill a man, you can't kill an idea."

The turmoil has already tipped Hong Kong's economy into recession and the threat of a change in trade status brought fresh gloom.

Wang, Beijing's top diplomat, condemned the bill as "naked interference in China's internal affairs", according to the foreign ministry, which said the comments were made during a meeting in Beijing with former US defense secretary William Cohen.

A foreign ministry spokesman also vowed that China would "take effective measures to resolutely fight back", giving no details.

Hong Kong is a semi-autonomous Chinese region and US policy treats its economy as separate from the rest of China.

That has been a key factor in the city's rise as an international financial hub, and left it exempt from the crippling tariffs imposed by Trump's administration.

The new US bill would require an annual review of that status, which could be revoked if the city's unique freedoms are quashed.

Beijing has repeatedly said it may act if Hong Kong spirals out of control, and China's state media said the US legislation would not change that calculus.

"Some may expect this to deter Beijing," the government mouthpiece Global Times said. "Such thinking is naive."