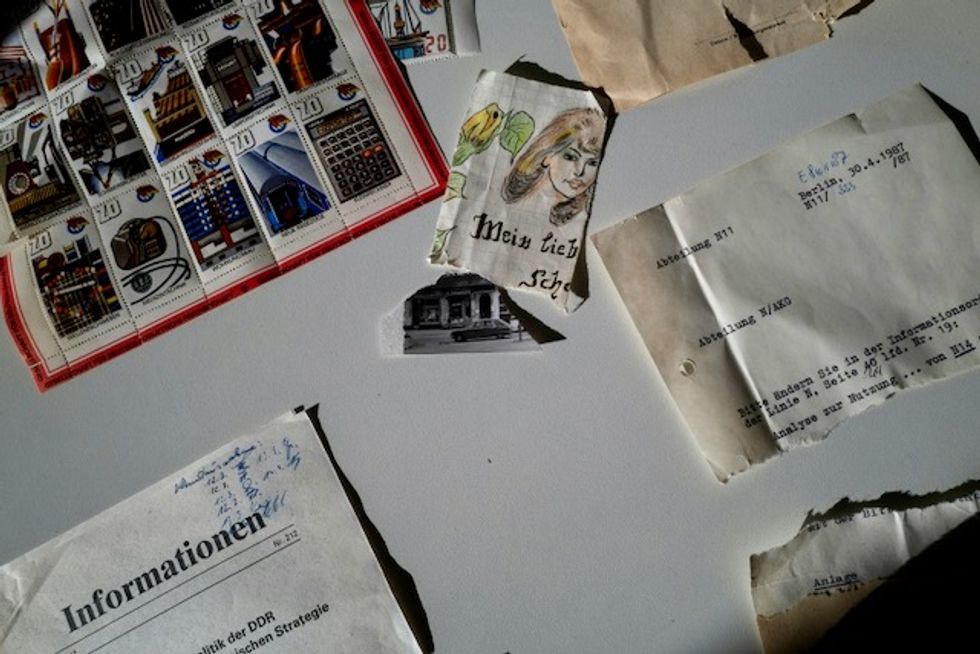 There are still 400 to 600 million fragments of surveillance reports, private letters or policy papers to be matched AFP / John MACDOUGALL

Barbara Poenisch spends most of her days at work doing puzzles -- piecing together a mountain of documents torn up by the hated East German Stasi secret police.

The former bookbinder is one in a team of 10 people painstakingly reconstructing surveillance reports, private letters or policy papers that the Stasi accumulated and desperately tried to destroy as the communist regime came crashing down 30 years ago.

When the Berlin Wall fell on November 9, 1989, the secret police began shredding their files.

The machines broke down under the strain, so they were forced to tear up the documents by hand to then pulp or burn the scraps.

But "citizen committees" stormed the Stasi's offices -- including its East Berlin headquarters -- on January 15, 1990, seizing millions of files along with 16,000 bags of torn up documents to preserve them for the future.

The East Berlin-based Ministry of State Security, known as the Stasi, had been one of the world's most effective instruments for state repression during its nearly 40 years of existence.

It employed more than 270,000 people -- many of them informants seeded throughout the population -- during the Cold War, making East German society the most intensely monitored in the Eastern bloc.

Three decades on, its secrets are still being revealed as Poenisch and her colleagues at the BStU federal office for Stasi records reconstruct the ripped up papers.

"I enjoy doing puzzles and the search, that's a little like detective work," said Poenisch, herself an east German, with a smile.

More crucially, she said, "it is gratifying to be able to put together these things that were once torn up 30 years ago... because I know that this material will then be looked at by an archivist and make a contribution towards our coming to terms with the past."

Thousands of spies were unmasked as the Stasi files became available to the public in the years following German reunification in 1990.

Many East Germans learned that their friends and even family members had been keeping tabs on them as "unofficial collaborators" of the Stasi.

What Poenisch describes as her "small contribution to coming to terms with the past" is therefore in fact a Herculean task with an impact on the real lives of thousands if not millions of people.

Among personal items that she had pieced together is a letter written by a mother pleading with the Stasi to free her son.

"That was from a few years back and really touched me," she said.

Carefully aligning two scraps of papers, holding each side down with paper weights before firmly sticking them together, Poenisch underlined that the key to her job is not only patience, but more importantly, recognition of the "huge responsibility" it carries.

Since manual reconstruction of the ripped up papers began in 1995, some 500 bags of fragments -- equivalent to more than 1.5 million pages -- have been pieced together.

Bombshells turned up by the archivists as they reconstruct the documents include papers proving the state-sponsored doping of East German athletes or papers about extreme left Red Army Faction militant Silke Maier-Witt, who went underground in the GDR.

AFP / John MACDOUGALL The former headquarters of the Stasi, which was one of the world's most effective instruments for state repression during its nearly 40 years of existence

Many more may lay hidden for years, as on average, it takes each puzzler 18 months to completely reconstruct each sack of shreds, said Andreas Loder, who leads the manual reconstruction team.

With each bag containing fragments making up as many as 3,500 pages, it means there remain up to 600 million fragments to be pieced into some 55 million pages.

Hopes had been raised in 2013, when technology was deployed to help in the process.

But the so-called e-Puzzler developed by research institute Fraunhofer IPK proved helpless in the face of hundreds of thousands of fragments. Eventually, only 23 bags or around 91,000 pages were put together.

A new machine is being designed and archivists hope it will be deployed in the coming years.

For now, it is back to human labour.

Ute Michalsky, who oversees the reconstruction work, admits that she cannot say if there will come a day when all the fragments will be pieced together.

But she stressed the importance of pushing ahead with the work, noting that the priority will be to put together documents that carry personal significance.

"The bags in which documents with information about people who the Stasi kept tabs on" are first on the list, she said.

"For many affected people, such things are still very important for rehabilitation... so we're not looking particularly for controversial documents or explosive finds.

"For us it's more important to help victims of the dictatorship claim their right" to know what the secret police knew about them.