GOP counsel Steve Castor ripped for ‘drowning’ during impeachment: ‘Someone find a lifeguard’ 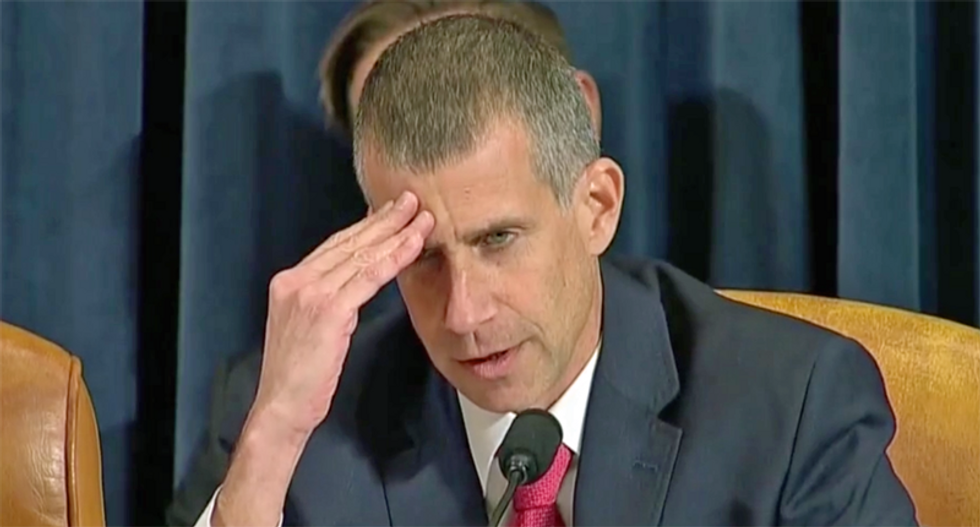 Federalist Society contributor Steve Castor, who has worked for Republicans on the Intelligence Committee since 2005, was hoped to be a hero for Republicans.

“From Tom Davis to Darrell Issa to me to Jim Jordan to Trey Gowdy, he’s always had everybody’s confidence and we are an eclectic group of oversight chairs and ranking members,” former Rep. Jason Chaffetz (R-UT) told The Daily Beast. “And the fact that he’s had all of our confidence is saying something.”

But Castor did not appear to rise to the occasion.

Here's some of what people were saying about his questioning:

Did Steve Castor get his law degree from Trump University? The Republicans aren’t sending their best
— Roland Scahill (@Roland Scahill) 1573668071.0

Steve Castor is an inept questioner but in fairness there’s nothing he could say that would shake the ironclad proo… https://t.co/qYc8ObBjz2
— Max Boot (@Max Boot) 1573668547.0

@ZerlinaMaxwell I am not a lawyer but Steve Castor is no Daniel Goldman.
— Ilovemylife (@Ilovemylife) 1573668040.0

Did Steve Castor eat some really bad chili for lunch or does he always look like that?
— Tami Burages (@Tami Burages) 1573668282.0

It's nice that we can all watch Steve Castor get a televised explanation of how diplomacy is supposed to work from career diplomats.
— Lily Adams (@Lily Adams) 1573668123.0

I'm not sure if Steve Castor is a bad lawyer or if he was just given a bad assignment, but Daniel Goldman has been… https://t.co/MCVdpyjMXu
— Keith Boykin (@Keith Boykin) 1573668006.0

Steve Castor, employing the tried and true "look over there, not over here," strategy. #ImpeachmentHearings
— Jessica Levinson (@Jessica Levinson) 1573669129.0

Well, Republican Steve Castor seems like he spent at least a good 5 minutes prepping for this interview of Ambassador Taylor….
— ByeDon 👋 (@ByeDon 👋) 1573668007.0

Steve Castor’s strategy is not to elicit any actual supporting testimony from Kent or Taylor but rather to testify… https://t.co/eehxgOMYxS
— Daniel W. Drezner (@Daniel W. Drezner) 1573668992.0

The guy sitting behind Steve Castor is all of us right now. #ImpeachmentHearings https://t.co/hoipuJCUEG
— Zack Hunt (@Zack Hunt) 1573669068.0

Steve Castor is doing so badly which means he is going to get a senior position in the Trump White House before days end
— Roland Scahill (@Roland Scahill) 1573668908.0