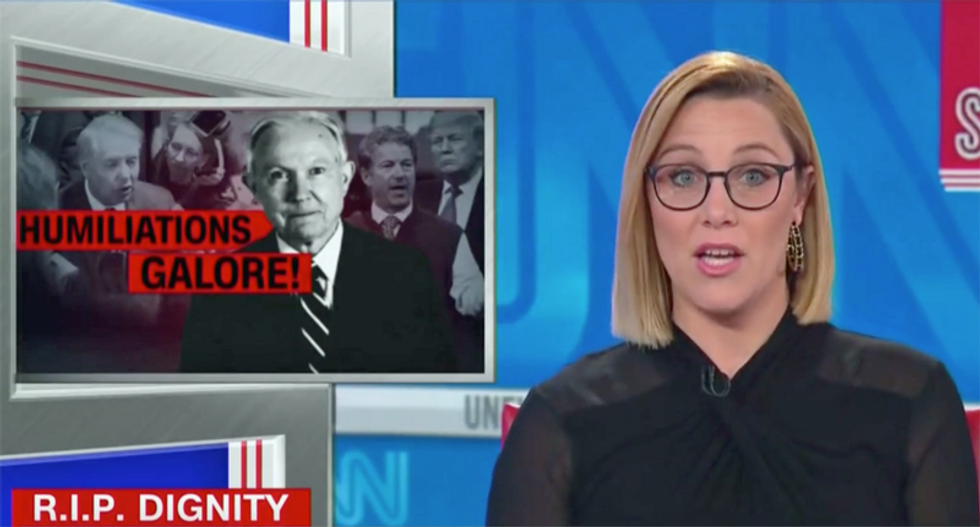 Former Attorney General Jeff Sessions was ripped on CNN on Saturday for lacking a spine in his dealings with President Donald Trump.

Sessions is running for the Alabama Senate seat he had held prior to resigning to serve in Trump's cabinet. To start his campaign, Graham released an ad with gratuitous praise for Trump.

"President Trump called him weak, confused, ineffective and allegedly called him a dumb southerner and according to The New York Times, an idiot to his face. How has Jeff Sessions -- his fired Attorney General -- responded to the humiliating insults. Take a look," CNN's S.E. Cupp said, playing Sessions' ad.

"Sessions joins a long line of GOP heavyweights who have grovelled at the feet of the president despite being personally insulted and humiliated by him. Trump once called Rand Paul a delusional narcissist and fake conservative," she noted. "Trump once gave out Lindsey Graham’s personal cell phone number on national television. He insulted Ted Cruz’s wife, attacked his faith, questioned his citizenship, and accused his dad of being involved in the Kennedy assassination," she noted. "And yet, all three have lined up behind Trump to shield him from oversight and defend his regular abuses of power."