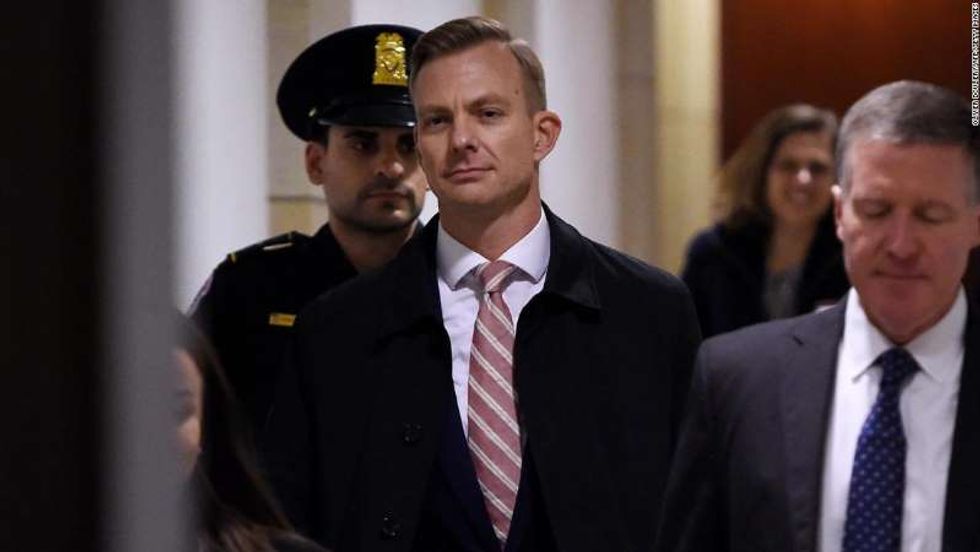 New testimony from State Department employee David Holmes given to the House Intelligence Committee on Friday in closed session confirmed a previous revelation that he had overheard President Donald Trump on a phone call discussing Ukrainian investigations, CNN reported.

Ambassador Bill Taylor had testifed Wednesday that Holmes, his aide, had overheard Ambassador to the European Union Gordon Sondland speak to Trump on the phone in a restaurant on July 26, the day after the president's infamous phone call with Ukraine that sparked the impeachment.

Here are five stunning details about Holmes' opening testimony, as revealed by CNN:

Sondland reportedly told Trump that Ukrainian President Volodymyr Zelensky "loves your ass" — a sign of just how self-obsessed the president is and how he expects those around him to be sycophantic.

"So, he’s gonna do the investigation?" Trump then reportedly asked Sondland. Sondland replied "He's gonna do it" and that Zelensky would do "anything you ask him to," according to the CNN report.

This ties Trump directly to Sondland's work pushing for the investigations in Ukraine. Existing evidence already showed that Trump was deeply involved in the effort, but Republicans have nevertheless tried to raise doubts about this claim. This testimony seems to undercut that argument even more.

Holmes also confirmed Taylor's testimony about the President’s thoughts on Ukraine, saying he asked Sondland “if it was true that the President did not ‘give a s—t about Ukraine.'”

In response to a question from Holmes, Sondland reportedly said that the "big stuff" was stuff that benefits Trump, "like the Biden investigation that Mr. Giuliani was pushing."

This testimony is bad for both Sondland and Trump. Sondland previously testified that he didn't realize the investigations he was pushing for in Ukraine would have involved the Bidens, which these claims seem to contradict. And it also bolsters the already strong case that Trump had no interest in corruption in Ukraine, as his defenders claim, but only in taking down a potential political opponent.

5. "I could hear the president’s voice through the earpiece of the phone."

Holmes reportedly said he didn't take notes on the conversation, but he remembered it clearly. And he also reported that Trump's voice on the phone call was so loud he could hear what the president said, even though it wasn't on speakerphone — which raises even more questions about the operational security of the call, which is already highly dubious.