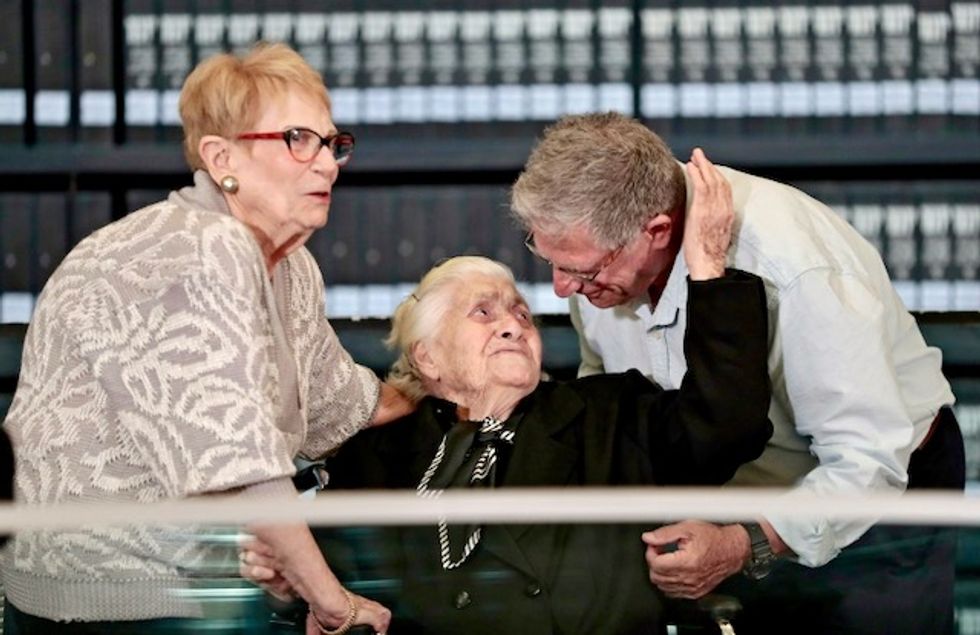 Eyes brimming with tears, 92-year-old Melpomeni Dina Gianopoulou was reunited Sunday with Jewish siblings she had helped hide from Nazis in her native Greece during World War II.

Holocaust survivor Sarah Yanai, 86, had tears in her eyes as she held Melpomeni's hand.

"It is a very emotional feeling, I can't describe it," she said.

"We were hidden in her house. She saved all my family. Six persons... you can't imagine how dangerous it was for her, for her family, to keep us all," she added.

"What can I say. They saved our lives."

The highly emotional meeting took place at the Hall of Names, in Jerusalem's Yad Vashem Holocaust memorial centre, a memorial to millions of Jews killed in the Holocaust.

During World War II, Melpomeni and her two sisters first hid the Mordechai family in a mosque before moving them to their own home in Veria, a small town near Thessaloniki, where they stayed for two years.

He is now 77, but still carries with him stories he was told about their life in hiding.

Mor said their situation was "deteriorating" in the mosque, especially that of his small brother Shmuel, who had fallen ill.

But he said the Greek sisters made a daring attempt to rescue him.

"They put him on their shoulders and they walked to the hospital in the middle of the night. It was quite far," Mor said.

Some days later, the Greek sisters went back to the hospital to visit Shmuel but found him covered with a white sheet.

Yossi Dagan, one of Mor's grandchildren, said he grew up hearing this story over and over again.

"For me, the three Greek sisters always symbolised heroism, a model of life," said Dagan, 28.

On Sunday, Sarah and Yossi brought their children and grandchildren to meet their saviour.

In all, more than 20 people, young and old, stood in front of the white-haired lady before hugging her, one by one.

"I would like to have saved more," Melpomeni said in Greek.

In 1994, Yad Vashem honoured Melpomeni and her sisters by granting them the title of "Righteous Among the Nations" given to those who helped save Jews during World War II.

Over the years, Yad Vashem has given the award, on behalf of the State of Israel, to more than 27,000 non-Jewish people around the world as a sign of gratitude for taking huge risks to save Jewish lives.

Between 1939 and 1945, the Nazi regime killed some six million Jews, more than a third of the Jewish population at the time.