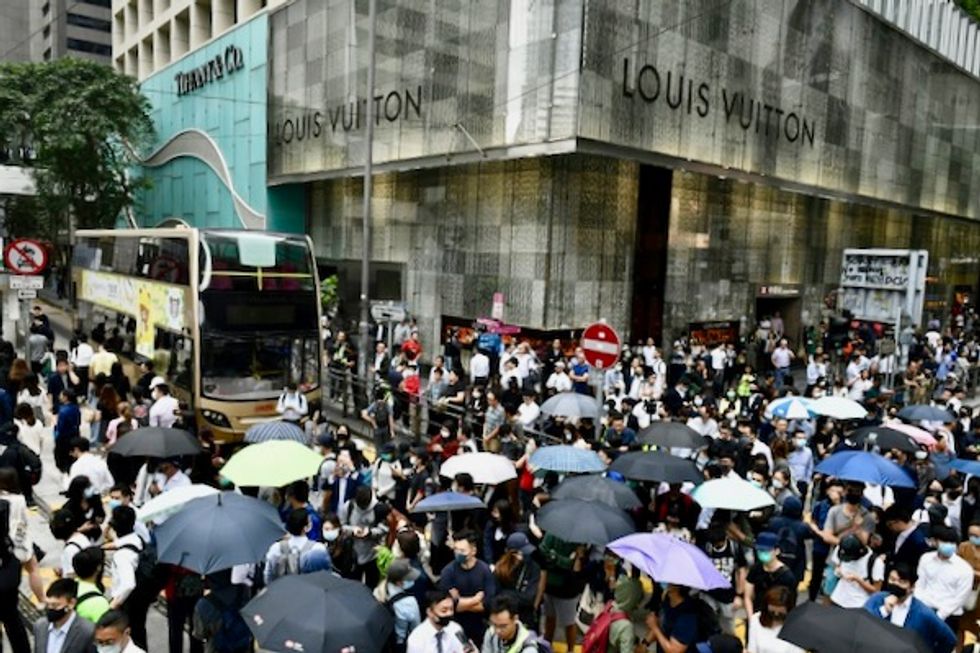 Hong Kong pro-democracy protesters clashed with riot police in the city's upmarket business district and on university campuses Tuesday, extending one of the most violent stretches of unrest seen in more than five months of political chaos.

The confrontations followed a particularly brutal day on Monday, when police shot a protester and a man was set on fire, prompting calls from western powers for compromise but further fury in China against the challenge to its rule.

"Hong Kong's rule of law has been pushed to the brink of total collapse," police spokesman Kong Wing-cheung told a press conference on Tuesday afternoon as he denounced the latest rounds of violence.

In Central, a district that is home to many blue-chip international firms and luxury shops, thousands of office workers occupied roads for hours on Tuesday chanting: "Fight for freedom, stand with Hong Kong!".

Hundreds of hardcore protesters, dressed in their signature black clothes and masks, then used a passenger bus to barricade a key road in the area.

They threw bricks and other objects before retreating when riot police fired tear gas in the shadows of high-end stores.

The scenes in Central were a vivid illustration of how moderate people are continuing to back the pro-democracy movement even as their more radical allies adopt more violent tactics.

Meanwhile, universities emerged as a new battleground with sustained clashes at major campuses for the first time.

At China University of Hong Kong, police fired multiple volleys of tear gas and rubber bullets in the afternoon at hundreds of protesters, who had built barricades afters an hours-long stand-off between the two sides.

Protesters responded with bricks and petrol bombs, while a vehicle used in a barricade was set alight.

At City University, protesters used a three-person slingshot to fire bricks at police from a footbridge.

During the morning rush hour hardcore protesters blocked roads, threw objects onto rail tracks and held up subway trains, sparking yet another bout of transport chaos throughout the city.

China has ruled Hong Kong under a "one country, two systems" framework, which allows the city greater freedoms than on the mainland, since its handover from the British in 1997.

The protest movement has been fuelled by Beijing's tightening control over Hong Kong.

Protesters are demanding a right to freely elect their leaders, as well as an independent inquiry in what they see as police brutality.

But China has steadfastly refused to give any concessions to the protesters, and instead warned of even tougher security measures.

China has repeatedly signalled that it would be prepared to send mainland security forces into Hong Kong.

Chinese state media on Tuesday again raised the spectre of the People's Liberation Army being deployed to end the crisis.

The warnings were in response to Monday's violence, in which a man was doused with a flammable liquid and set ablaze by a masked assailant following an argument with pro-democracy protesters.

Chinese authorities, as well as state-run media, have said the attack was an example of protesters' violent tactics, although the assailant has not been arrested and his identity remains unknown.

"We condemn violence on all sides, extend our sympathies to victims of violence regardless of their political inclinations, and call for all parties -- police and protesters -- to exercise restraint," US State Department spokeswoman Morgan Ortagus said in a statement.

They were reacting in fury to a police officer shooting a 21-year-old protester on Monday morning, with that incident broadcast live on Facebook by a bystander.

Both the man set alight and the shot protester remained in critical condition on Tuesday, hospital authorities said.

Tensions had initially spiked following the death last week of a young man who fell from a multi-storey car park during clashes with police.

He was the first student to die in the five months of protests, and protests over the weekend then escalated at the start of the working week.

Monday's unrest prompted the United States and Britain to urge Beijing and Hong Kong leader Carrie Lam to find a compromise with protesters.