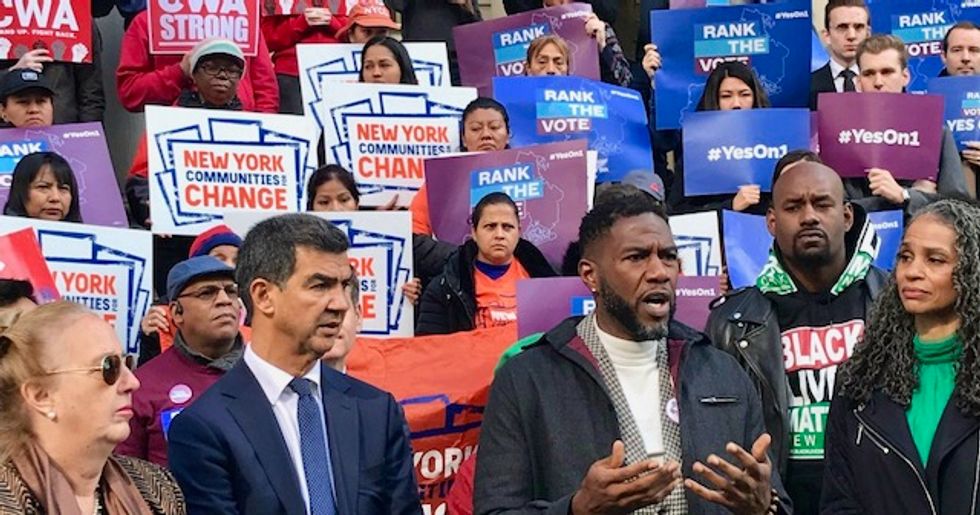 With the new system, said one supporter, "candidates will have to knock on the door of not just a certain plurality, but on the diverse doors of NYC's mosaic majority."

Voting rights advocates celebrated a "huge win for democracy" Tuesday after New Yorkers approved a ballot measure that would establish ranked-choice voting in the nation's most populous city.

"It's been too easy for candidates to ignore marginalized communities, including LGBTQ voters, because they didn't think they needed every vote to win. Ranked-choice voting ends that mindset."

With 90% reporting as of Wednesday morning, New York City's Ballot Question 1 won approval from 73.5% of voters.

NYC's ranked-choice voting (RCV) measure was supported by a number of advocacy groups, politicians, and even The New York Times editorial board, which called the question the "most exciting proposal" of the five measures considered by city voters Tuesday.

In an RCV system—also known as an instant runoff voting system—voters rank candidates for each office in order of preference on their ballots. If no candidate secures a majority of first-choice votes, an elimination process is triggered and continues until one candidate has majority support.

RCV has been growing in popularity across the United States in recent years. It is used in local and party election in some places around the country and statewide in Maine.

In addition to establishing RCV in primary and special elections for all local offices beginning in 2021, the ballot measure will "increase the time between a city office vacancy and the special election to fill it from 45 days (60 for mayor) to 80 days" and "change the timeline for city council redistricting to complete it prior to city council nominating petition signature collection."

Celebrating the ballot measure's passage on Tuesday night, Common Cause NY executive director Susan Lerner said that RCV "is the simple solution that puts power back in the hands of the people where it belongs. We look forward to working with our diverse partners and elected officials to educate New Yorkers on how this important reform will work in the local 2021 elections and beyond."

The advocacy group FairVote, which fights for fair elections and supports RCV, declared on Twitter: "This is huge for the #RankedChoiceVoting movement!"

This is huge for the #RankedChoiceVoting movement! "New York City has become the latest — and most populous — city… https://t.co/wOtFZn8yRw
— FairVote (@FairVote) 1573009125.0

Supporters of an RCV system argue that it pushes candidates to focus on engaging voters rather than negative campaigning. FairVote president Rob Richie told Politico, "You've got to be, I think, a better candidate."

"You as a candidate have a lot more reasons to have conversations and engagements with people," he said. "The candidates that run traditional campaigns that involve using money and not using people have not done as well."

Rod Townsend, president of the Stonewall Democratic Club of NYC, said in statement ahead of the vote Tuesday that "it's been too easy for candidates to ignore marginalized communities, including LGBTQ voters, because they didn't think they needed every vote to win. Ranked-choice voting ends that mindset because with RCV, every vote matters."

"With ranked-choice voting, marginalized communities will be engaged by every candidate," Townsend added. "Candidates will have to knock on the door of not just a certain plurality, but on the diverse doors of NYC's mosaic majority."