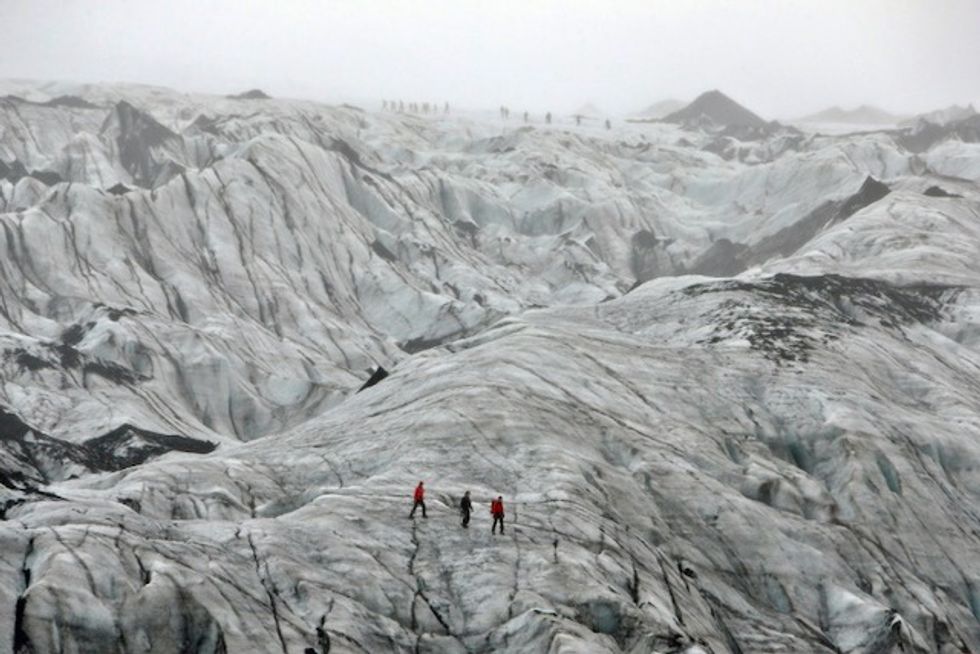 Icelandic seventh-grader Lilja Einarsdottir is on an unusual field trip with her class: they're measuring the Solheimajokull glacier to see how much it has shrunk in the past year, witnessing climate change first-hand.

"It is very beautiful but at the same time it is very sad to see how much it has melted," says Lilja, bundled up against the autumn chill in a blue pompom hat.

Each October since 2010, now-retired schoolteacher Jon Stefansson has brought students aged around 13 from a school in Hvolsvollur -- a village about 60 kilometers (40 miles) away -- to the glacier to record its evolution.

The results are chilling: nestled between two moss-covered mountain slopes, Solheimajokull has shrunk by an average of 40 meters (130 feet) per year in the past decade, according to the students' measurements.

On this blustery October day, the youngsters -- armed with a GPS, a measuring tape and two yellow flags -- calculate the distances on foot from various spots, struggling against strong winds.

Once done, some of the students hop in a dinghy and cross a lake of brown meltwater to reach an imposing wall of ice, the so-called terminus, or front of the glacier.

Here, they determine the gap between the terminus and a handpainted sign at the end of a footpath, where previous students have recorded their measurements over the years.

The numbers on the sign, pitched in black sand and steadied at the base by a pile of stones, indicate how many meters of ice have disappeared over the past years: "24", "50", "110".

"When (the first students) started here, you couldn't see any water. So it (the glacier) was very big at first," says Lilja.

Glaciers cover about 11 percent of Iceland's surface, including Vatnajokull, the largest ice cap in Europe.

But they have lost about 250 cubic kilometers of ice in the past 25 years, or the equivalent of seven percent of their total volume.

"Now we have lakes that are forming in front of many of them," says glaciologist Hrafnhildur Hannesdottir of the Icelandic Meteorological Office.

Iceland in August unveiled a plaque commemorating the country's Okjokull glacier, the first to be stripped of its glacier status in 2014.

The plaque was meant as a wake-up call on the effects of global warming as scientists fear the island's 400-plus glaciers could be gone by 2200.

Solheimajokull, where the students go, is a popular tourist spot as it is one of the closest to Reykjavik, only 150 kilometrers away. Icelandic Mountain Guides, one of three operators that runs year-round visits, had 27,000 clients in 2018.

Solheimajokull, about 10 kilometres long and two kilometers wide, is an outlet glacier of Myrdalsjokull, the country's fourth-biggest ice cap.

Under the ice here lies Katla, one of Iceland's most powerful volcanoes, which last erupted in 1901 and is long overdue to do so again, scientists say.

The glacier receded by 11 metres in 2019, a significant amount but far from the record 110 meters registered last year.

"It depends more or less on the weather (and) how the glacier is breaking," explains teacher Stefansson.

"Sometimes you get a big cliff falling into the water and then you get a very, very big measurement."

Since the school started its measurements, the glacier has shrunk by 380 meters in almost a decade.

"When we see this, it's like proof (of global warming). If we thought that we were maybe wrong, this is proof we weren't," says 12-year-old Birna Bjornsdottir.

The measurements are neither scientifically exact nor official but they do indicate the changes underway and their acceleration in recent years.

Official measurements from the Iceland Geological Society show Solheimajokull shrank by around 200 metres in 2018, putting it among the country's top three glacier shrinkages.

It has been receding every summer since 1996.

The melting can be observed with the naked eye, with drops of water dripping from the ice, sometimes running into little streams.

"I see a large change in the glacier's volume: it's a lot lower than it used to be," says Daniel Saulite, a Scottish guide who has worked on the glacier for five years.

"In the front, there is also a lot more crevassing, and also the access becomes increasingly difficult."