In statement that 'reads like a chilling warning of more coups to come,' Trump celebrates military coup in Bolivia 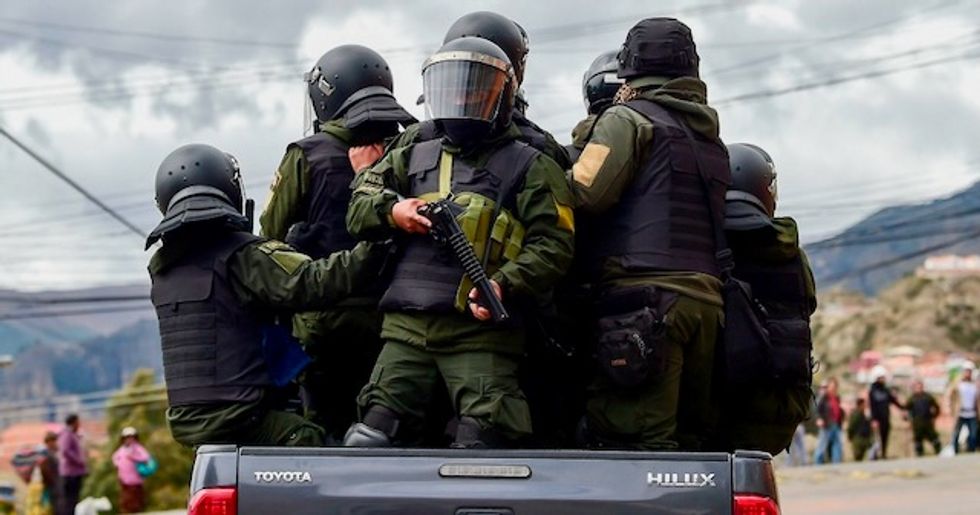 "The Trump administration has cast aside the pretext of calling for new elections. Now it's praising Evo Morales' resignation at the barrel of a gun."

U.S. President Donald Trump made official his administration's support for the military coup in Bolivia with a celebratory statement late Monday that one observer said "reads like a chilling warning of more coups to come."

"The United States applauds the Bolivian people for demanding freedom and the Bolivian military for abiding by its oath to protect not just a single person, but Bolivia's constitution," Trump said in a statement posted to the White House website.

"These events send a strong signal to the illegitimate regimes in Venezuela and Nicaragua that democracy and the will of the people will always prevail," Trump added. "We are now one step closer to a completely democratic, prosperous, and free Western Hemisphere."

The governments of Nicaragua and Venezuela—both victims of past U.S.-backed military coups—have condemned the ouster of Morales in Bolivia.

The Trump administration has not been quiet about its desire for the removal of Bolivia's socialist President Evo Morales, who resigned Sunday under threat from the nation's military, police forces, and violent right-wing protesters.

Hours before Morales resigned in a televised address, U.S. Secretary of State Mike Pompeo tweeted his support for the findings of the U.S.-dominated Organization of American States (OAS), which alleged Morales' victory in the October presidential election was riddled with fraud. Pompeo also echoed OAS' call for new elections, a demand Morales accepted shortly before he was forced aside.

Guillaume Long, senior policy analyst Center for Economic and Policy Research (CEPR) and co-author of recent analysis of the October election, disputed the OAS findings in a statement last week, arguing "there is simply no statistical or evidentiary basis to dispute the vote count results showing that Evo Morales won in the first round."

"In the parlance of American empire," Cohen said, "a military coup is considered an expression of democracy."

CEPR co-director Mark Weisbrot tweeted late Monday that Trump's statement in support of the coup in Bolivia is "no surprise."

"The Trump/[Sen. Marco] Rubio team has been helping the coup all along," Weisbrot said. "But his statement, like his 'I like oil, we're keeping the oil," in Syria, is embarrassingly blunt and also menacing."

Trump's applause for the coup in Bolivia came as the Mexican government granted asylum to Morales, who tweeted Monday night that he is leaving Bolivia amid concerns for his safety.

"I am leaving for Mexico, grateful for the openness of these brothers who offered us asylum," said Morales. "Soon I will return with more strength and energy."