Jane Fonda under arrest again, in US climate protest 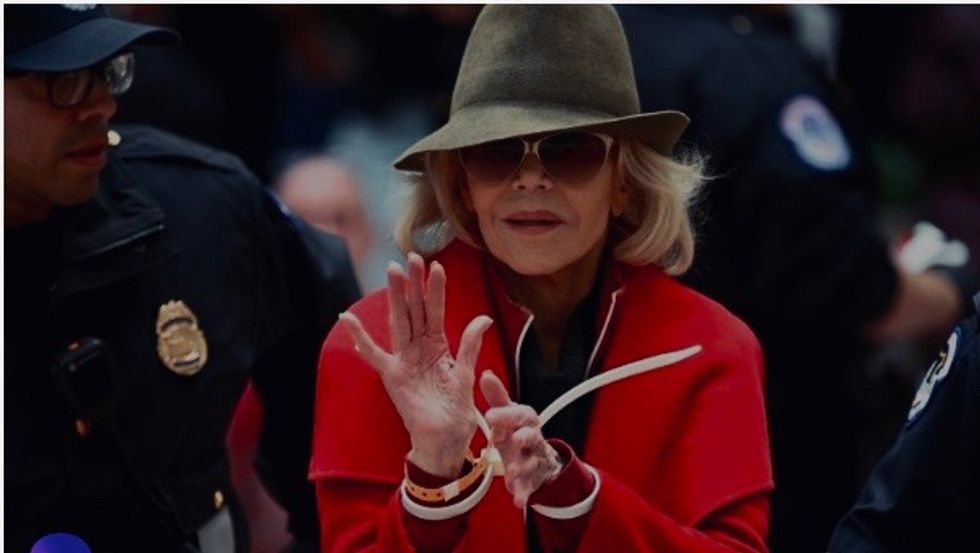 "This time, I may be detained overnight and that's fine for one night, big deal!" Fonda joked to reporters, noting that this was not her first arrest as police put plastic wire around her wrists.

Along with several dozen activists including actresses Rosanna Arquette and Catherine Keener, Fonda sat chanting on the floor of a Senate building where no demonstrations are allowed.

A pacifist and feminist activist since the 1970s, Fonda, who still works full-time at almost 82, said she was drawn to the movement by Swedish teenager and climate advocate Greta Thunberg.

"There are many ways to fight. But I'm inspired by Greta Thunberg and the young student strikers all over the world," she said.

"I'm a celebrity. So this is a way to use my celebrity to get the message out that we face a crisis that could determine whether or not our children and grandchildren have a future that's even habitable."

It is urgent to act, argued Fonda who went to Vietnam in 1972 to demonstrate against the war, a controversial move that earned him the nickname "Hanoi Jane."

"We have 11 years to turn it around; we will have to be very brave and very united and very determined," she said.

Fonda, who wore an eye-catching bright red coat, was referring to scientific reports indicating that sharp decreases in carbon emissions are necessary before 2030 if the world hopes to prevent catastrophic global warming.

- With Diane Lane and Mark Ruffalo -

Nowadays, Fonda says she supports the "Green New Deal," an ambitious proposal offered by progressive Democrats that would dramatically shift the United States away from fossil fuels toward renewable energy.

Republicans -- including President Donald Trump -- slam the initiative, which they call too radical.

"You can call it radical. But I think that what's radical is not doing anything," she quipped, noting that she has not endorsed any 2020 presidential hopeful.

To those who call her a socialist, Fonda deftly suggests that "the fact that taxpayers pay $16 billion a year to subsidize the fossil fuel industry, that's socialism."

Fonda was to spend the night in jail and appear in DC Superior Court on Saturday, charged with crowding, obstruction or incommoding, according to the Hollywood Reporter.

But the actress has promised to return next Friday with the founders of the ice cream brand Ben & Jerry's plus actors Diane Lane and Mark Ruffalo.

She says she is ready to be arrested "again and again" at least until mid-January, because after that, she is due in Hollywood to work on the next season of her award-winning Netflix series "Grace and Frankie."