Jim Jordan childishly refuses to condemn Trump's Ukraine call: 'Democrats have been out to get the president' 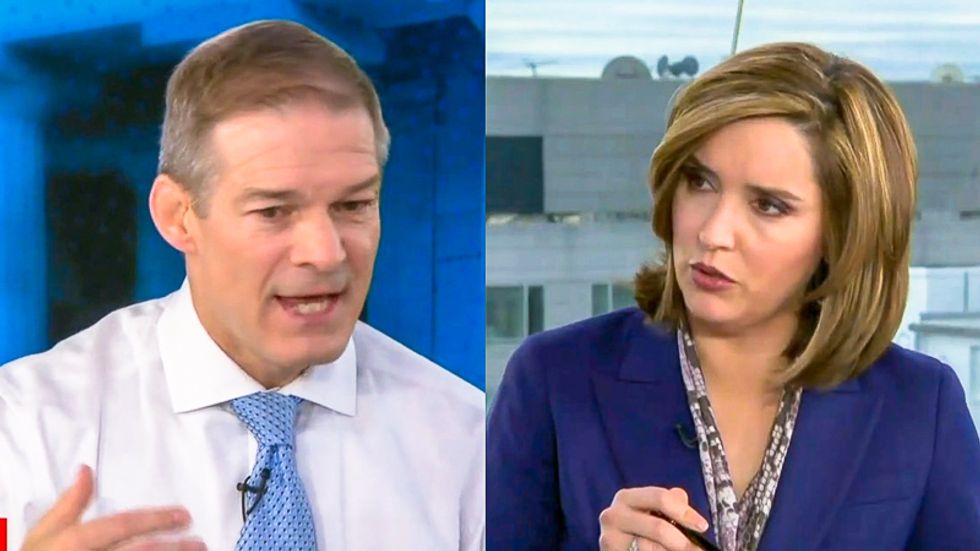 Rep. Jim Jordan (R-OH) on Sunday argued that President Donald Trump should not be impeached because he never completed his quid pro quo with Ukraine.

During an interview on CBS, host Margaret Brennan explained that Trump only released aid to Ukraine after a whistleblower came forward with allegations that he was trying to bribe the country's president to investigate political rival Joe Biden.

"Most important, the Ukrainians did nothing, as far as investigations go, to get the aid released," Jordan opined. "There was never this quid pro quo, that the Democrats all promise existed before President Trump released the phone call."

"Facts will never change," the congressman ranted. "That’s the funny thing about facts they don’t change, the fact we have the transcript and no linkage of any type of a security assistance dollars for an investigation in the call, two guys on the call, [Ukraine President Volodymyr Zelensky] said no pressure and no linkage, the Ukrainians didn’t know the aid was held at the time."

Brennan interrupted: "I understand you say the aid was released. But to put a fine point on it, are you comfortable with the investigation that was requested?"

"With with [interference in] the 2020 election, are you comfortable [with that]?" Brennan asked.

"There was never an investigation undertaken," Jordan insisted, refusing to answer the question.

Brennan reminded Jordan that Trump made a request for an investigation.

"It never happened there is all kind of talk about things and it didn’t happen," Jordan complained.

"And the attempt doesn’t bother you?" Brennan pressed.

Jordan, however, declined to give a straight answer.

"What do the Democrats tell you? there was a quid pro quo," Jordan said. "The scary thing is the Democrats have been out to get the president."