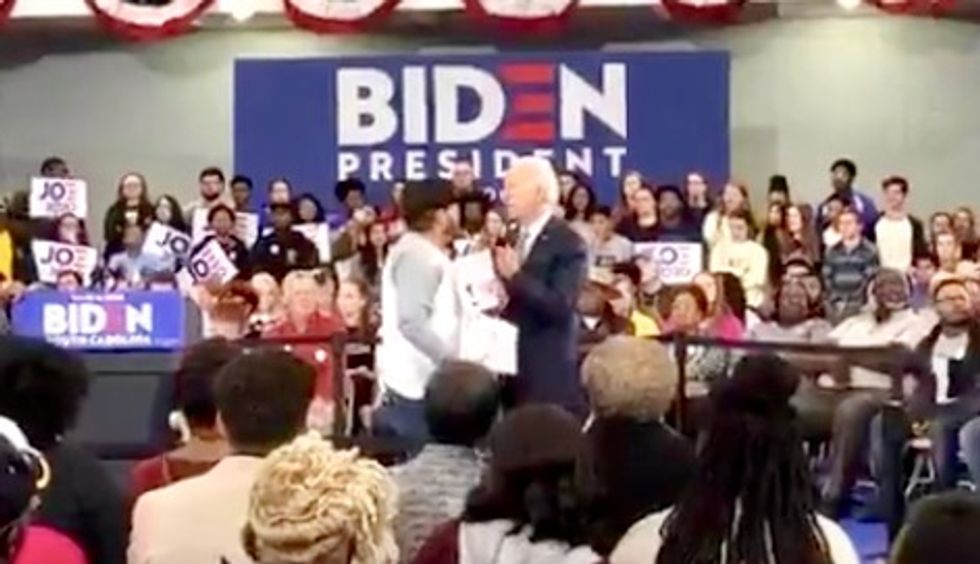 The former vice president also told climate activists that they "listen to Bernie too much" after they demanded he reject corporate cash.

During a campaign event in Greenwood, South Carolina Thursday night, former Vice President Joe Biden told a protestor who confronted him over the Obama administration's mass deportation policies to "vote for Trump," prompting outrage from immigrant rights groups and activists.

"By now, it is clear that the immigrant community cannot trust Biden."

"You should vote for Trump," Biden repeated as Carlos Rojas, an organizer with Movimiento Cosecha, urged the former Vice President to depart from the destructive record of the Obama White House and support a moratorium on deportations.

Biden, a 2020 Democratic presidential candidate, refused to agree to the demand, insisting that he will "prioritize deportations only of people who have committed a felony or a serious crime."

Rojas replied that he wants to ensure immigrants living in the United States don't have to live in fear of deportation and separation from their families.

"You have the power, as a candidate, to actually commit to stop all deportations from day one—and we want to hear you say that," Rojas said.

Watch the exchange, which quickly went viral on Twitter:

In a statement (pdf) following the town hall, Rojas said, "By now, it is clear that the immigrant community cannot trust Biden."

"Any candidate who claims to be against Trump's raids and family separations needs to commit to a full moratorium on deportations," Rojas added. "We won't accept empty promises of immigration reform, while our families are torn apart. ​We cannot allow history to repeat itself."

Biden was also confronted by climate activists from Friends of the Earth during the Greenwood event, which came a day after the 2020 Democratic presidential debate in Atlanta.

"Please don't take money from corporations," said a woman in the audience.

"I do not take money from corporations," replied Biden, whose campaign last month greenlighted the creation of a super PAC organized by corporate lobbyists who serve clients in multiple major industries, including fossil fuels.

"You listen to Bernie too much, man, it's not true," added Biden, referring to rival 2020 Democratic presidential candidate Sen. Bernie Sanders (I-Vt.).

"And they are right," Shakir added.