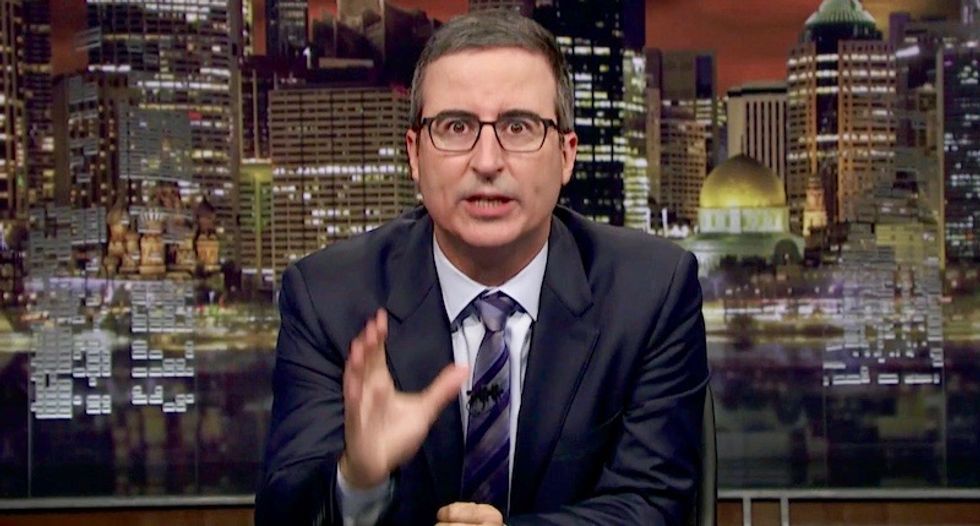 "Late Week Tonight" had the final word on this week's porta-potty full of news by taking aim at President Donald Trump's idea of a "fireside chat" reading the summary of his notorious Ukraine call.

"This is over a phone call that is a good call," Trump told the conservative Washington Examiner this week. "At some point, I'm going to sit down, perhaps as a fireside chat on live television and I will read the transcript of the call, because people have to hear it."

Oliver exclaimed: "That is not a good idea!"

He explained that even reading the summary in it's abridged form wouldn't go well given Trump's propensity to go off on a tangent about the border wall, former President Barack Obama and whatever conspiracy theory someone told him that day.

"There is no way Trump has the attention span to sit down and read a 2,000-word document on live television without losing focus or going wildly off-topic," Oliver explained. "If you told him to read Hop on Pop, by page three he'd be rambling about how great the chicken tenders are at Mar-a-Lago, how zebras are just loser horses, and how he invented the word 'dog.'"

The other problem is that the summary is so incredibly damning that the idea of reading it aloud (without changing what it says) would be a political disaster.

Oliver also noted that this week Republicans lashed out at Democrats for the impeachment investigation, comparing it to the former Soviet Union. The host advised the GOP to avoid referring to Russia in any capacity given Trump's history.

But the main source of frustration for Oliver came from Trump's constant need to call the scandal a "witch hunt" while simultaneously saying that somehow the Democrats are the witches.

Over the Halloween week, Trump's campaign began selling t-shirts using the movie poster from "Hocus Pocus," which calls Democrats the witches who are somehow hunting other witches. It isn't entirely clear.

"So, it's a witch hunt where the witches are doing the hunting, which is categorically not what a witch hunt is in the same way a duck hunt doesn't mean a bunch of ducks are hunting humans in the woods," he continued.

Check out the hilarious opener below: