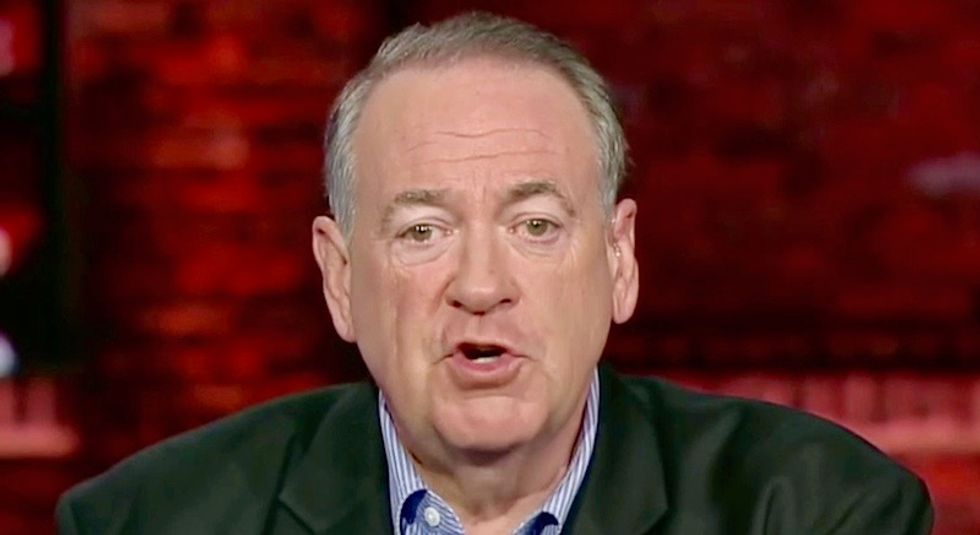 Mike Huckabee is lashing out at the privately-held Christian chicken fast-food chain he repeatedly has defended for its anti-LGBTQ charitable giving policies. Chick-fil-A announced Monday it will no longer donate to the Salvation Army and the Fellowship of Christian Athletes, two non-profits that have histories of actively working against LGBTQ people and causes like marriage equality.

Instead, the Chick-fil-A Foundation will focus “exclusively in the areas of education, homelessness and hunger,” the company says according to Business Insider.

For Huckabee. that's "sad" and "tragic."

The former Arkansas governor and failed GOP presidential candidate took to Twitter to express his anger.

"The sad message of @ChickfilA is quite clear- they surrendered to anti- Christian hate groups. Tragic," he tweeted.

Huckabee also bragged about his efforts to politicize the Christian chicken chain when he created a "Chick-fil-A Appreciation Day."

Huckabee is getting called out for his right wing religious hypocrisy.

"Huckabee is lashing out at the company for focusing on — I repeat — education, homelessness, and hunger," writes Hemant Mehta at Friendly Atheist. "He’s angry that they’re helping the poor instead of sticking it to LGBTQ people. Chick-fil-A, of course, has vehemently denied that they were ever anti-LGBTQ, so Huckabee’s rant merely confirms what critics have always said about them."

"It’s also ironic because you could easily make the argument that Chick-fil-A is sticking to its Christian values with the change," Mehta continues. "They’re going all in on imitating Jesus! It wouldn’t even be hard to make that argument. But Huckabee, always in Christian Persecution mode, can’t bring himself to do that. Even he seems to believe Christianity is all about hating LGBTQ people, and a company that avoids that is somehow anti-Christian."