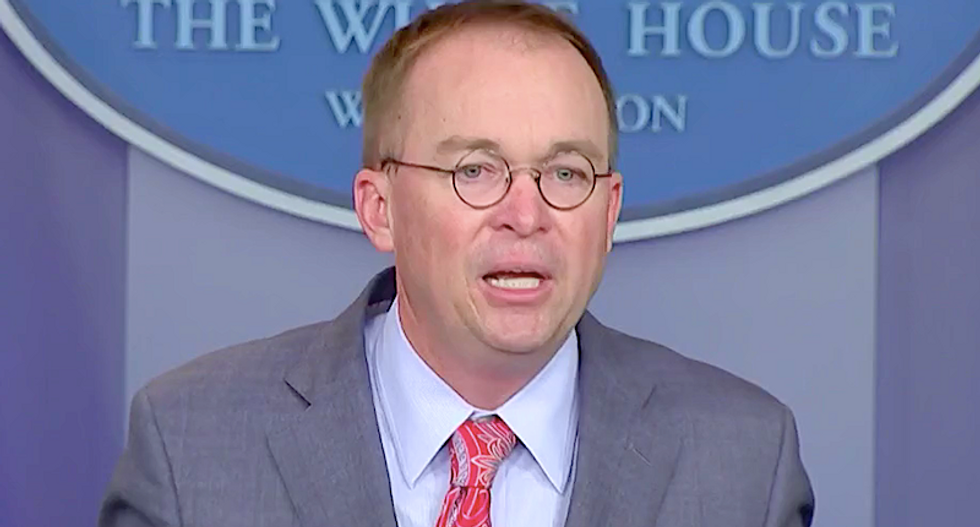 As former federal prosecutor Joyce Vance pointed out, Hill recalled during her testimony how angry she was about Sondland not briefing her. She said that after hearing his testimony Wednesday and learning he was briefing Mike Pompeo, John Bolton, Mulvaney and President Donald Trump. She then decided he was correct-they had separate missions and Sondland was on a domestic political errand.

Fiona Hill slays. She recalls her anger Sondland was not briefing her. She says after hearing his testimony yesterd… https://t.co/k4KQlQaYee
— Joyce Alene (@Joyce Alene)1574361569.0

Mulvaney confessed to the "quid pro quo," while speaking to the press in the White House briefing room.

"The look-back to what happened in 2016 certainly was part of the thing that [Trump] was worried about in corruption with that nation. And that is absolutely appropriate," said Mulvaney. "Did he also mention to me in passing the corruption related to the DNC server? Absolutely. No question about that. But that's it, and that's why we held up the money."

Jon Karl, White House correspondent for ABC News, asked Mulvaney if he understood that what he described "is a quid pro quo."

"It is funding will not flow unless the investigation into the Democratic server happened," said Karl.

"We do that all the time with foreign policy," said Mulvaney. "Get over it. There's going to be political influence in foreign policy... That is going to happen. Elections have consequences."

Mulvaney has refused to testify under oath.

The Republican vote to acquit former President Trump wasn't just a vote to avoid accountability. It was a vote to further enfeeble and obfuscate the Constitution.

In an interview with CNN's Sara Sidner, Proud Boys leader Enrique Tarrio admitted that, although he encouraged members of his far-right group to attend the "Stop the Steal" rally on Jan 6th that led to a riot at the Capitol building, he doesn't believe the election was stolen from Donald Trump -- and the added that members of the Proud Boys who entered the building broke the law.

Texas's prevailing social Darwinism was expressed most succinctly last week by the mayor of Colorado City, who accused his constituents – trapped in near sub-zero temperatures and complaining about lack of heat, electricity, and drinkable water – of being the "lazy" products of a "socialist government," adding "I'm sick and tired of people looking for a damn handout!" and predicting "only the strong will survive and the weak will perish."

Texas has the third-highest number of billionaires in America, most of them oil tycoons. Its laissez-faire state energy market delivered a bonanza to oil and gas producers that managed to keep production going during the freeze. It was "like hitting the jackpot," boasted president of Comstock Resources on an earnings call. Jerry Jones, billionaire owner of the Dallas Cowboys, holds a majority of Comstock's shares.