'My head is now exploding': Fox panel bursts out laughing over Trump's idea to read Ukraine call in a 'fireside chat' 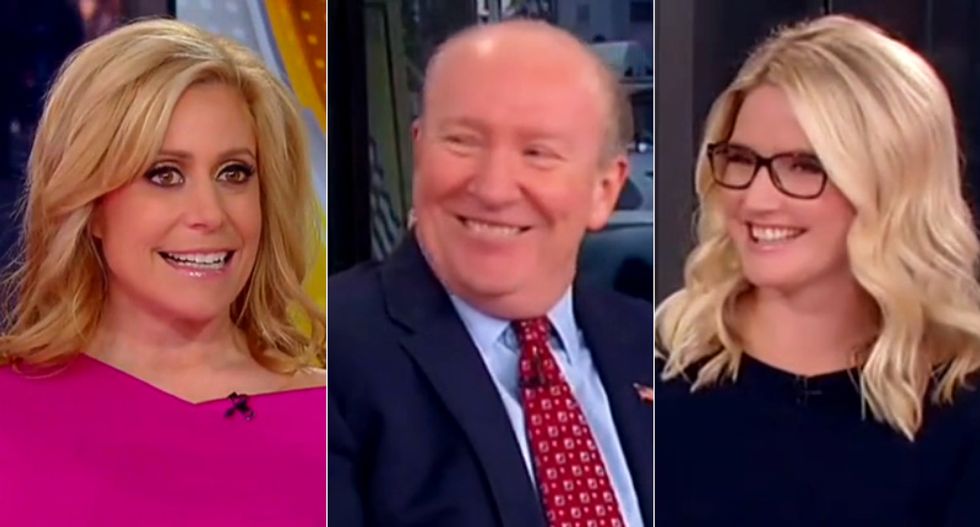 A Fox News panel on Friday repeatedly laughed while discussing President Donald Trump claim that he was considering reading the full transcript of his controversial phone call with the Ukrainian president in a "fireside chat."

"President Trump tells The Washington Examiner that at some point, 'as a fireside chat on live television,' he's going to read the rough transcript of his July 25th phone call to show what a good call it was," said Fox News co-host Marie Harf, chuckling.

"The president also signaling to the Examiner that he will not cooperate with the Democrats impeachment inquiry," she added, as her co-host Melissa Francis could be heard laughing.

"My head is now exploding," Harf added. "Do you think this would be politically helpful? A lot of the language in that call does not sound good. How would he address the idea that people have now testify that this was not a full transcript? There were things that were omitted in it. How would he deal with that, do you think?"

Fox guest Andrew McCarthy replied that Trump reading the transcript aloud wouldn't be helpful, but giving a speech about the controversial call wasn't a bad idea.

"I don’t agree with that. I think reading the transcript would be interesting to see," co-host Harris Faulkner remarked.

"Oh, I agree with that," McCarthy interjected, laughing.