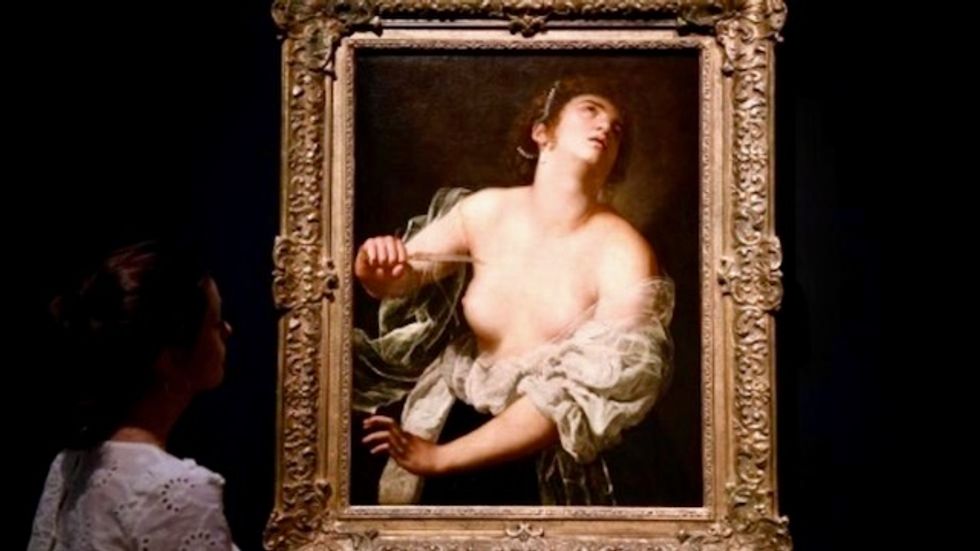 A newly discovered canvas by the female 17th-century Italian painter Artemisia Gentileschi will go up for auction in Paris next week amid a surge of interest in her extraordinarily dramatic work.

The painting was discovered only recently in a private collection in the French city of Lyon, where it had been stored unrecognized for some 40 years, Artcurial said.

The painting depicts Lucretia, the ancient Roman noblewoman who killed herself after being raped, showing her bare-breasted and about to plunge a dagger into her upper chest.

The work is "worthy of the great museums of the world" and "comes to us in an exceptional state of conservation", said prominent art expert Eric Turquin.

It is extremely rare for Artemisia works to come on the market and the painting is expected to go to a private buyer.

The current record for her work is the 2.8 million euros reached for a painting of Saint Catherine sold in Paris in 2017.

After several years of obscurity, Artemisia (1593-1654) is now recognized as one of the greatest painters of the post-Caravaggio era and one of the few to match the great Baroque master's sense of drama and light.

Her status as of the few female painters of the period has also fueled a surge of interest in her work and life.

She was raped by fellow painter Agostino Tassi and had to undergo excruciating cross-examination during a highly publicized trial which resulted in his conviction.

The painting of Lucretia shows a "desire to shock, force through a point and find the viewer which is Caravaggio-esque," Turquin said.

Matthieu Fournier, director of the department of old masters at Artcurial, described the depiction of Lucretia in the painting as "autobiographical".

"The story of Artemisia is just like that story (of Lucretia) except that Artemisia decided on another outcome for her life," he told AFP.

"She was raped by Tassi who worked with her father Orazio Gentileschi. She decided to start a trial so he was convicted. She won. Thus she gave a destiny of salvation to her life as a woman and career as an artist," he added.

In a sign of Artemisia's growing prominence, the National Gallery in London will next year stage the first major exhibition of her work in Britain, bringing together 35 works from around the world.