Noam Chomsky weighs in on impeachment, 2020 election and Syria withdrawal: ‘Trump is impeachable 100 times over’ 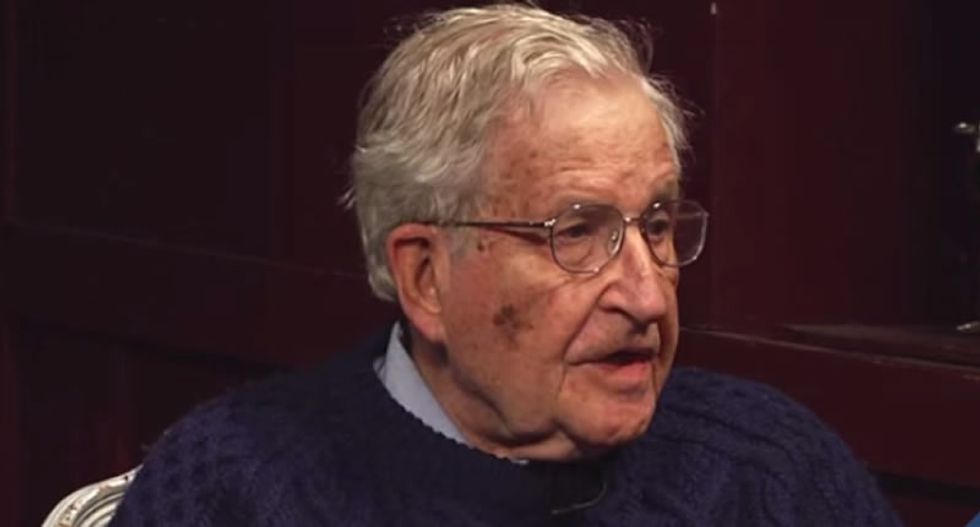 Noam Chomsky was railing against far-right Republicans and neoliberal corporate Democrats long before Donald Trump became president, but the Trump era has certainly given the veteran journalist/author plenty to talk about. And Chomsky, now 90, weighed in on everything from impeachment to the 2020 presidential election during a late October appearance on The Intercept’s “Deconstructed” podcast.

The interview was conducted by liberal/progressive British journalist and anti-Trump firebrand Mehdi Hasan. When asked about the impeachment inquiry that Trump is facing in the U.S. House of Representatives, Chomsky asserted that while Trump certainly deserves impeachment, it is important to analyze the economic and political forces that have led to Trumpism.

“Trump is impeachable 100 times over,” Chomsky told Hasan. “You know, he’s a major crook. There’s no doubt about it.”

Chomsky quickly added, however, that he seriously doubts the Senate will remove Trump from office — and Trump might even use impeachment to his political advantage in 2020.

“What’ll happen is probably the House will impeach, goes to the Senate,” Chomsky predicted. “The Republican senators are utterly craven. They’re terrified of Trump’s voting base; so, they’ll vote to turn down the impeachment request. Trump will come along, say, ‘I’m vindicated.’ Say it was the deep state and the treacherous Dems trying to overturn the election — ‘oh, vote for me.’”

Chomsky asserted that while Trump is “off the spectrum,” so is “the Republican Party generally.” The Philadelphia native noted, “Two well-known commentators from the American Enterprise Institute, Thomas Mann and Norman Orenstein years ago, described the Republican Party since Newt Gingrich as a radical insurgency that has abandoned parliamentary politics.”

But Chomsky was also highly critical of the Democratic Party during the interview. Discussing the 2020 presidential election, Chomsky told Hasan that corporate Democratic neoliberals will do everything they can to “get rid of” Sen. Bernie Sanders and Sen. Elizabeth Warren and prevent either of them from receiving the party’s nomination.

“What’s actually happened is that during the neoliberal period, both of the political parties have shifted to the right,” Chomsky observed. “So, the mainstream Democrats — the ones who are now meeting with their billionaire friends to try to figure out how to get rid of Sanders and Warren — they’re basically what used to be called moderate Republicans. The Democrats abandoned the working class by the late ’70s.”

Chomsky told Hasan that if he were voting in the 2020 Democratic presidential primary, he would vote for Sanders — adding, “I think Warren would be a reasonable candidate.”

Chomsky said of Warren, “I think many of her plans are perfectly reasonable. She’s working with quite serious economists, some of them friends….. (But) she has not organized a mass political movement , which Sanders did. And it’s had a lot of effect. That’s how you get people in Congress like (Rep. Alexandria) Ocasio-Cortez and others: because of this movement.”

Over the years, Chomsky has often been a blistering critic of U.S. foreign policy. But Chomsky has opposed Trump’s recent decision to withdraw U.S. troops from northeastern Syria — which Hasan found surprising in light of how anti-interventionist he has been so many times.

Chomsky clarified his position, telling Hasan, “From the left at least, the call for withdrawal was based on anti-imperialist principles. But principles have to be understood in connection with the human reality of the existing circumstances. A small, U.S. contingent with the sole mission of deterring a planned Turkish invasion, which was obvious, is not imperialism. It’s protecting the Kurds from an expansion of the atrocities and massacres that (Turkish President Recep Tayyip) Erdogan has been carrying out both within Turkey itself and in the areas of Syria that he’s already conquered.”