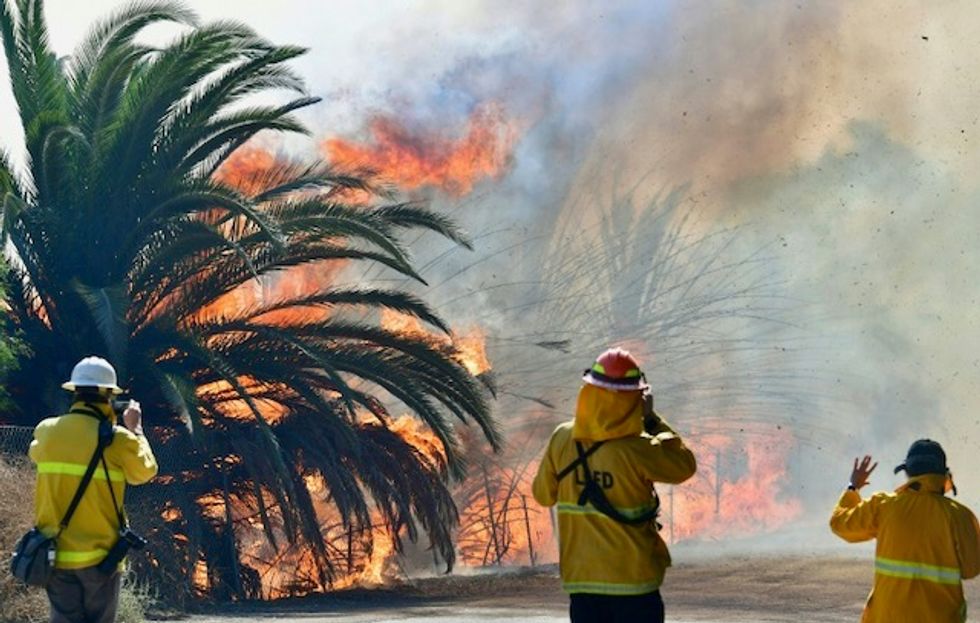 They dashed to the neighborhood where wealthy residents like Arnold Schwarzenegger were fleeing their homes, then to the inferno that threatened the Ronald Reagan Presidential Library, then back again.

But unlike state firefighters, Brandini was not concerned with protecting most of the exclusive residences lining these valleys.

He and his team are private firefighters.

"I only protect the houses that are on my list," he told AFP. "I don't just go there randomly -- that's the difference between me and the state firefighters.

"They go out and protect every house. I protect the houses that are actually enrolled in the program."

Firms like Brandini's Firebreak Protection Systems hit the headlines last year when Kim Kardashian West revealed she had employed a company to shield her home outside Los Angeles from wildfire.

Some were troubled by the ethics of private-sector firefighting. Fees can reach as high as $25,000 per day for a dedicated, manned truck at your personal property -- a luxury only the elite can enjoy.

Brandini is sanguine about it.

"I'm there for them... If there's a fire in their area, I'm loading up and going there to make sure they're safe until the fire passes."

The growth in private firefighting has been driven by insurance companies, who hire firms based on the calculation that it would cost them more to rebuild multi-million dollar mansions.

Most of Brandini's work is from insurance firms.

"When people say, 'Oh, you guys cater to the rich' -- no, the rich are already rich, and they hired an insurance company that's rich to cover their house, and with that comes their in-house fire department," he said.

But having been stung badly by last year's Malibu blazes, some insurance firms are refusing to underwrite properties in high-risk zones, forcing wealthy individuals to seek private protection.

"I've had more calls on these last two fires than I've had in three years total," said Brandini.

He only has six wildfire response staff running three trucks, but plans to expand private coverage next year.

Further north in California, Don Holter's wildfire company has been running for almost three decades and has 25 staff.

He mainly works for the government on rolling three-year contracts, but the last 15 years have seen a growth in individual clients.

"I work for anyone else that needs me," he said.

Holter charges $5,000 a day per truck to individuals threatened by fires, but even in an emergency won't send his team out until his clients read through a detailed contract.

"I can't guarantee anybody's house is going to make it through a fire -- I'll do my best to keep it from burning, but it's Mother Nature," he said. "If the wind is blowing 85-90 mph, there's nothing nobody's going to do.

"As long as they agree to the terms, they know I'll do everything in my power," he said, adding that his crew's safety comes first.

While Holter admits most people can't afford his daily firefighting rate, he says it is fair market value.

"If I got to feed somebody, put them in a motel every night, feed them 3 meals a day and then pay them for a day's work, it's hard to do it much cheaper."

Instead, his company Mt Adams Wildfire, based outside Sacramento, prefers to focus on early preventive measures such as clearing brush, setting up sprinkler systems and educating residents.

Another criticism leveled at private firms has been from state firefighters who complain about having to jostle with civilian crews.

"When I started this in 2006, we were not really welcomed by any of the fire departments," Brandini admitted. "They see this private agency come in, they're like, 'What are you guys doing here?' We got pushed back for quite a few years."

But Brandini says that has changed as state resources have become increasingly overwhelmed.

"In the last 2-3 years it's changed dramatically. They're really receptive to us."