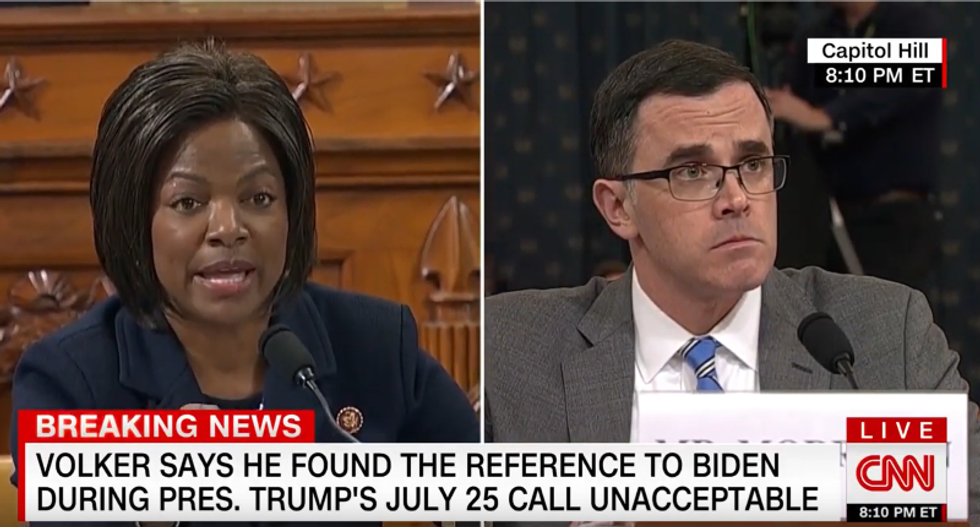 At the impeachment hearings on Tuesday, National Security Council aide Tim Morrison stressed that he didn't believe there was anything inappropriate about the call between President Donald Trump and Ukrainian President Volodymyr Zelensky. But when Rep. Val Demings (D-FL) asked him why he reported the call to government lawyers, he had no answer.

"You responded to a series of questions about the call and saw nothing wrong with it, yet you skipped your chain of command to go to legal counsel to find out — I guess to find out what to do, because you were concerned about the political fallout, not about anything being appropriate or wrong with the call, is that correct?" asked Demings.

"Ma'am, I don't agree with the question," said Morrison.

"You saw basically nothing wrong with the call, yet you skipped your chain of command to go to counsel because of what?" Demings pressed him. "What was the reason for that?"

"Again, I don't know the premise," said Morrison. "If I had seen something wrong—"

"Who's your direct report?" Demings asked.

"Did you speak to him before the legal counsel?" asked Demings.

"You don't feel you skipped your chain of command by going to counsel?" Demings continued.

"I viewed my job based on matters," said Morrison. "If that's an administrative matter, I was sure they needed to be aware of the call."

"Why were you so concerned about the legal adviser being aware of this call that you saw nothing basically wrong with the substance or content of the call?" asked Demings.

"What did you want them to be aware of, specifically?" asked Demings.

"I wanted them to be aware of the call and know what had transpired," said Morrison.

"What concerned you to the point where you wanted to know, that you went directly to legal counsel to inform them of?" asked Demings.

"My equivalent was and is John Eisenberg," said Morrison. "I wouldn't go to somebody subordinate to him."