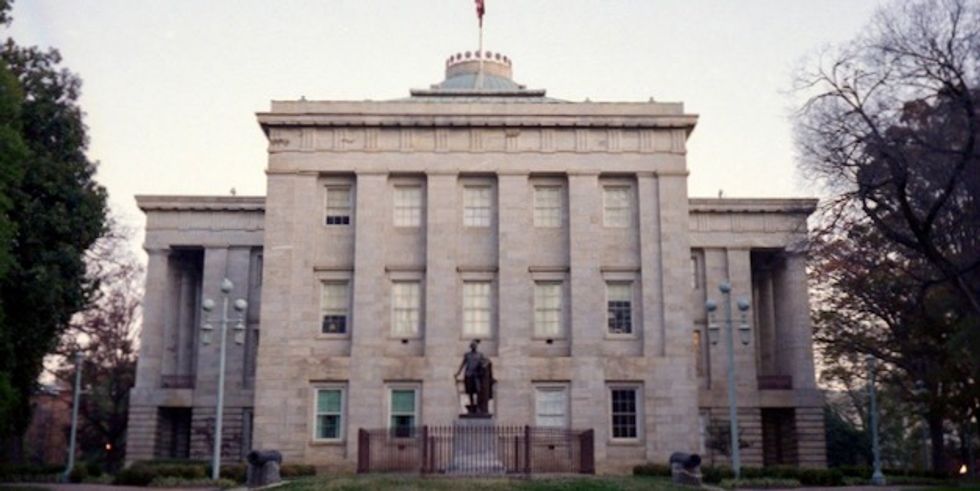 "This isn't just a harmless game. It's the reason there's no budget in North Carolina."

A viral video shared by a Democratic state lawmaker in North Carolina shows "political corruption in real time," as Republican state senators refuse to hold a vote while Democrats are present—in order to secure corporate tax cuts in their proposed budget.

State Sen. Jeff Jackson posted a video to Twitter on Thursday in which he is shown demanding that Republicans, who control both houses of the state legislature, call a vote on Gov. Roy Cooper's veto of the state budget.

Democrats hold 21 of the 50 Senate seats, the minimum needed to keep an override from passing as long as all Democrats are present for the vote.

Cooper vetoed the Republican budget in June, calling it "a bad budget with the wrong priorities." The proposal included corporate tax breaks but lacked meaningful raises for teachers and Medicaid expansion funding.

For days, Jackson said, Republicans had canceled a vote on overriding the veto when all Democrats were present. The cancellations were made, Jackson said, in the hopes that the GOP could "catch us unaware and override the veto," allowing the GOP's budget to go through.

"To be clear: Repeatedly postponing a vote not because some members are absent but because all members are present isn't just a dumb political game—it's a failure of integrity," tweeted Jackson. "It's petty corruption. And every day it continues it's hurting our state."

In the video, Jackson accused the Republican leadership of "maneuvering to try to get an unfair vote."

"We'll call one at the right time," Republican state Sen. Jerry Tillman replied. "I hope you'll miss it but nevertheless we'll call it."

The legislature won't take up the budget debate again until early 2020. According to the Morning Call, with Cooper's veto upheld and debate on a new budget bill stalled until January, "action can't occur on the budget bill or funding to carry out the state's long-planned Medicaid managed-care overhaul, which is now in danger of failing to begin Feb. 1."

"This isn't just a harmless game," Jackson said. "It's the reason there's no budget in North Carolina."

In September, Republicans in the state House maneuvered to override Cooper's veto after holding an unannounced vote when most Democrats were not at their seats.

Cooper called the stunt the GOP's "most deceptive stunt yet," and from other Democrats including state Rep. Deb Butler. Butler was seen in another viral video that garnered national attention, accusing the Republican leaders of "trickery" as one of her colleagues decried the "hijacking of democracy."

The state GOP's advantage over Democrats may be short-lived; this week a state court ruled that the current congressional map was the result of an unconstitutional gerrymander by Republicans. The court said in its decision on Monday that the GOP left "a detailed record of both the partisan intent and the intended partisan effect of the 2016 congressional districts."