Republican Party paid $60,000 for Trump and his crew to attend UFC match where he got booed 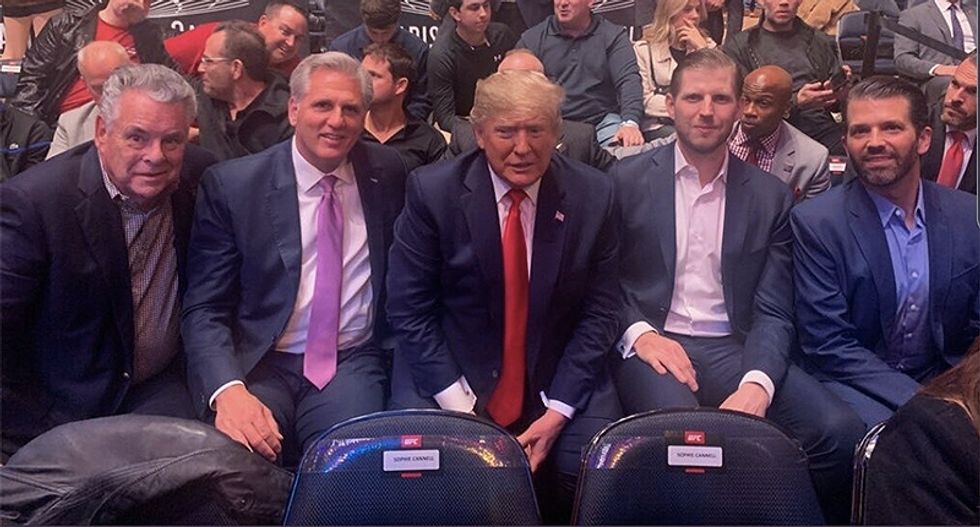 Over the weekend, President Donald Trump attended the UFC mixed martial arts match at Madison Square Garden where he brought several Republican leaders and members of his family. Like the World Series, Trump was booed there too, though not as loudly. Now the Washington Post is reporting that the Republican National Committee shelled out $60,000 for Trump to attend the event with his friends and family.

Trump, who claims to be a billionaire, made the RNC shell out big cash for his Saturday night in New York which adds to the $14,000 they spent for his suite at Game 5 between the Nationals and Astros.

"The price included the ringside seats for Trump and his guests, catering and security, one of the officials said. The president’s guests included House Minority Leader Kevin McCarthy (R-CA) and Reps. Mark Meadows (R-NC) and Peter T. King (R-NY), all Republican allies, along with his two adult sons," The Post reported.

The $60,000 was a total price tag for all tickets, catering and security. Public tickets ranged between $100 to $700, though Trump's group was near the front, so the price was likely on the higher end unless the UFC gave the RNC a deal.

Members of the U.S. House of Representatives are allowed to take free tickets to sporting events only if it's a fundraiser, the ethics rules say. This event was certainly not a campaign event or a fundraiser, so they will likely be forced to pay back the RNC or be slapped with ethics complaints.

The RNC said they paid for the tickets because Trump attended. It brings the grand total of $74,000 the RNC has spent on sporting events Trump wants to attend. He is slated to attend the Louisiana State and Alabama game over the weekend, though it's unknown who is paying for the tickets. The Republican Party didn't clarify why the self-described billionaire doesn't pay for his own tickets to sporting events.