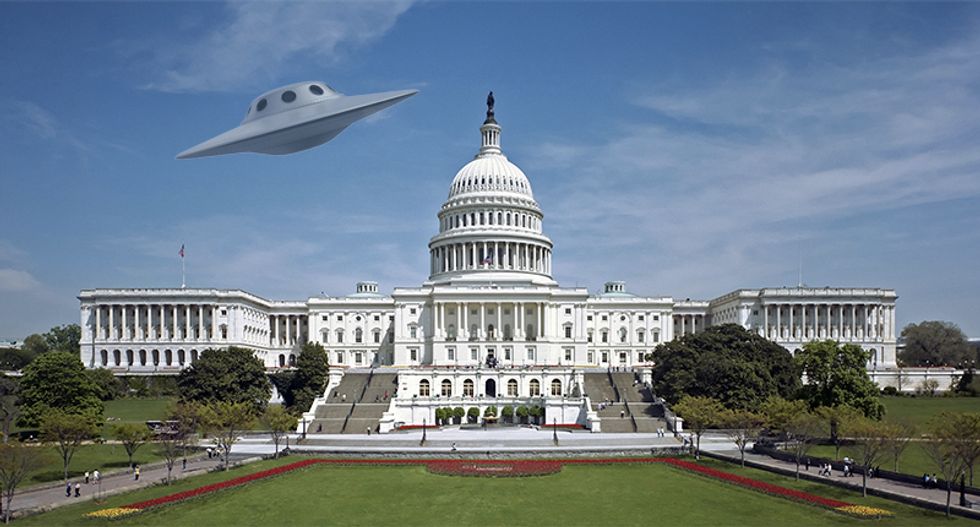 US Capitol with UFO (Photo: Wikipedia commons, photoshoed by RawStory)

Both the U.S. Capitol and the White House were on lockdown after the restricted airspace was breached and fighter jets were scrambled. The problem is that after several hours, no one knows what it was or even if it was real.

"With security incident this morning, Fox has specifically inquired whether Capitol security systems may have been hacked or if this may have been a 'test' by nefarious forces to judge how people may have responded," Pergram tweeted Tuesday afternoon. "Fox is told neither of those scenarios were in play."

He explained that Fox was told that security officials are still baffled and some even received different versions of a report on what happened, down to even the location and speed of the alleged aircraft.

"Officials heard it was 'hovering' and were even given 'knots' measuring its speed. But they still don’t know what it was," Pergram continued.

“We don’t know what the hell it was,” one knowledgeable source told Pergram. He explained that the security doesn't know "if it was birds, a 'weather anomaly,' a drone or what."

Fox is told security officials got different info as to location & speed regarding the aircraft in question potenti… https://t.co/4v2KSGVnt6
— Chad Pergram (@Chad Pergram) 1574803065.0

With security incident this morning, Fox has specifically inquired whether Capitol security systems may have been h… https://t.co/57WbK2Xcnz
— Chad Pergram (@Chad Pergram) 1574803109.0

Some on Twitter have joked that the flying object was a possible alien invasion.