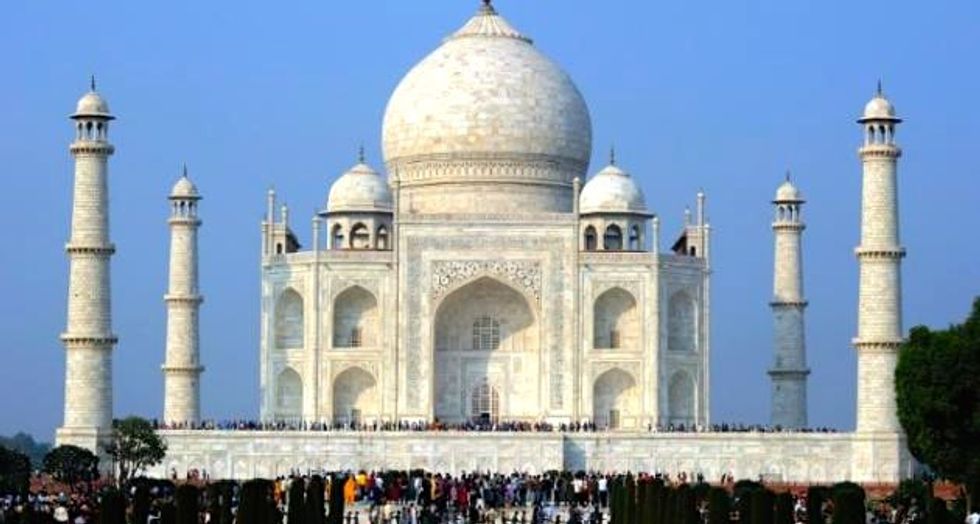 AFP/AFP/File - The Taj Mahal was built by Mughal emperor Shah Jahan as a tomb for his beloved wife Mumtaz Mahal, who died giving birth in 1631

New Delhi banned half the Indian capital's private cars from its roads on Monday as the megacity's 20 million people spluttered with stinging eyes in the worst pollution in three years.

As smog levels exceeded those of Beijing by more than three times, authorities also parked a van with an air purifier near the Taj Mahal -- the iconic 17th-century marble mausoleum 250 kilometres (150 miles) south of Delhi -- in a bid to clean the air in its surrounds, the Press Trust of India reported.

With the pollution causing a rush of respiratory complaints at hospitals and the diversion of 37 flights on Sunday, a new law came into effect restricting cars from the capital's roads to alternative days, depending on if their number plate ends in an odd or even number.

More than 600 police teams were deployed at road intersections in the capital with the power to hand out fines of 4,000 rupees (nearly $60) to transgressors

Exempt from the restrictions were Delhi's seven million motorbikes and scooters, public transport and cars carrying only women, stoking criticism that the measures were ineffective.

"There is smoke everywhere and people, including youngsters, kids, elderly are finding it difficult to breathe," Delhi's chief minister Arvind Kejriwal said in a Twitter video. "Eyes are burning. Pollution is that bad."

Construction was banned temporarily late last week in the world's most polluted capital city, while schools have been closed until Wednesday, with the city government handing out free pollution masks to children.

"I have a headache every day I wake up. It's suffocating to breathe sometimes. And inflammation in the nostrils and all. And eyes also. Like it kind of burns," Ankusha Kushi, a student, told AFP.

As Delhiites woke up on Monday, levels of particulates measuring less than 2.5 microns -- so tiny they enter deep into the respiratory tract -- were at 613 micrograms per cubic metre of air, according to the US embassy in Delhi.

The World Health Organisation's recommended safe daily maximum is a reading of 25.

In central Delhi, the state air quality institute rated levels of the tiny particulates -- which can be deadly over the long term -- as "severe".

Bollywood megastar Priyanka Chopra Jonas posted a selfie in pollution mask on Instagram and said it was "hard to shoot" in Delhi.

"I can’t even imagine what it must be like to live here under these conditions. We r blessed with air purifiers and masks. Pray for the homeless," she posted.

Fourteen Indian cities including the capital are among the world's top 15 most polluted cities, according to the World Health Organization.

One study last year said that a million Indians died prematurely every year as a result.

With a state election due in Delhi in early 2020, the crisis has also become a casualty of political bickering, with each side blaming the other.

Kejriwal, who likened Delhi to a "gas chamber" on Friday, said the city had done its part to curb pollution and that the burning of wheat stubble residue on farms outside the capital had to be stopped.

But national environment minister Prakash Javadekar accused Kejriwal of politicising the issue, while an MP from the governing Bharatiya Janata Party (BJP) dismissed the odd-even car rule as a "stunt" and said he planned to ignore it.

Experts warned that both state and national governments needed to go beyond short-term remedies.

"If air pollution was solely due to the vehicular traffic, then this would be a solution. Right now it cannot be a solution because motorised private transport has a very small share in the whole pie," Singh told AFP.