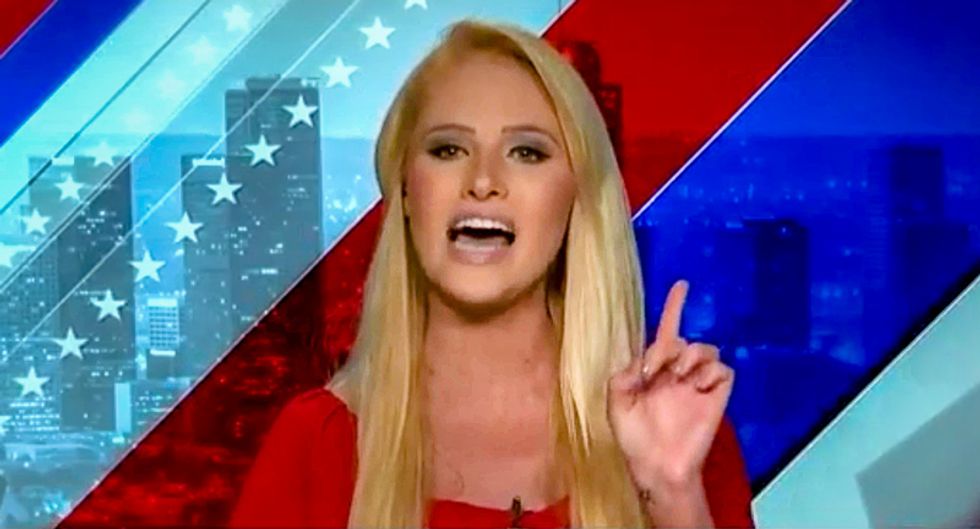 Lahren is once again peddling her unique brand of trumped-up outrage served with a side of lack of self awareness. The Fox News conservative commentator blasted students who attended a Tuesday youth summit in Baltimore focused on raising awareness of opioid abuse.

First Lady Melania Trump was a guest speaker. As she was introduced and walked onto the stage waving her hand, students offered up a chorus of loud boos.

"This is an epidemic in this country, not just of people not liking anyone with the last name of Trump, but just with young people being completely disrespectful," Lahren fumed on Wednesday's "Fox & Friends."

"She is an immigrant and she is a woman. The first thing she would say if an immigrant woman was booed on stage is that is racist, that is sexist, that is anti-immigrant, that is bigotry, that is intolerance. Because it's Melania Trump, people feel as though they get a pass. And it's absolutely wrong, it's despicable. Young people need to learn a lesson in this country, you just respect people."

"Tt's absolutely wrong, it's despicable. Young people need to learn a lesson in this country, you just respect people."

Tomi knows a great deal about respecting First Ladies – when their name is Trump. Ironically, it's when their name is Obama that Lahren sings a different tune. In fact, she was furious students treated Melania Trump the way she has treated Michelle Obama, for years. The difference: the students had every right to boo the First lady, given her support of her husband's policies and platform – including his birtherism.

The former First Lady, urging Democrats to vote in the 2018 elections, told them that thanks to their efforts, Brack Obama was elected president. She added that voting is not something you can do just once - it has to be every time.

Lahren was furious, because Obama called her husband a "great president."

"Michelle Obama said we 'had' a great president. By what measure?" Lahren tweeted. "Not in economic growth. Not in border enforcement. Not in strength on the world stage. Sit down, Michelle."

Telling a former First lady to "sit down" is incredibly disrespectful.

Here are a few more examples of Lahren attacking Obama:

I wonder what message it sends to the world about American dignity when Michelle Obama raps on YouTube... #smh #dignified
— Tomi Lahren (@Tomi Lahren) 1449885704.0

Michelle Obama is upset Melania never asked for advice on how to be First Lady. Michelle, besides ruining school lunches what did you do?
— Tomi Lahren (@Tomi Lahren) 1542140706.0