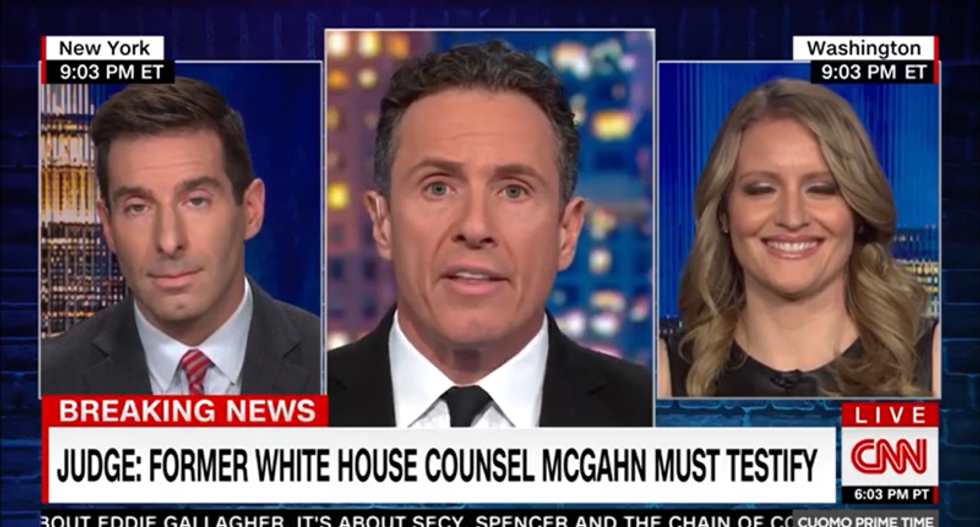 On Monday's edition of CNN's "Cuomo Prime Time," Trump campaign adviser Jenna Ellis attacked the judge at the heart of the case forcing former White House Counsel Don McGahn to testify — and was promptly shot down by both Chris Cuomo and former federal prosecutor Elie Honig.

"This wasn't a surprise at all, especially coming from this judge," said Ellis. "The White House has indicated of course they're going to appeal, and the Department of Justice will, so this is far from over. The precedent here is really what's important. When you start having White House counsel and people who should have privilege being able to talk to their clients in matters of national security, matters that are important to the executive branch, this is not part of congressional oversight. When you talk about precedent and constitutional law for the past 250 years, while it's not necessarily an absolute privilege, it should be very, very close ... the privilege between an attorney and their client, in this case the president, is very sacrosanct. To breach that, just for a witch hunt and a fishing expedition, is not the precedent we should be setting in this country."

"Well obviously, the judge [is] not the first judge to do so, who said that that basis doesn't hold water," said Cuomo. "That these are duly commissioned congressional committees, their subpoenas matter—"

"Their subpoenas matter, but not necessarily in this context and for this particular witch hunt," said Ellis.

"Well, the judge just said exactly the opposite," said Cuomo.

"The substance absolutely matters. I disagree with her. I think she'll be overturned."

"But she's the judge," shot back Cuomo. "That's the beauty of the system. You don't have to like it, but you must obey. No judge is going to call it a witch hunt. We can guarantee that right now."

"It is going to be really hard to draw a distinction between Don McGahn and the need for Congress and the entitlement of Congress to have that testimony, and the need for Congress, if they choose to take up this legal fight, to get testimony from all the witnesses missing in action, Mulvaney, Pompeo, Bolton, on down the line," said Honig. "The other thing I want to take issue with is the comment, I'm not surprised from this judge. I've been in front of dozens of federal judges in my career, and I was in the courtroom for the McGahn argument. This judge was on point, prepared and couldn't have been fairer, she heard out both sides. We were there for hours and hours beyond closing. It's really not fair to cast aspersions on this judge."

"Of course you're going to say that because you agree with that," said Ellis derisively. "Trying to compare records and personal attacks don't get you far in disagreeing with the merits of what she said."

"I saw her in action," said Honig.

"And I read the opinion," shot back Ellis.