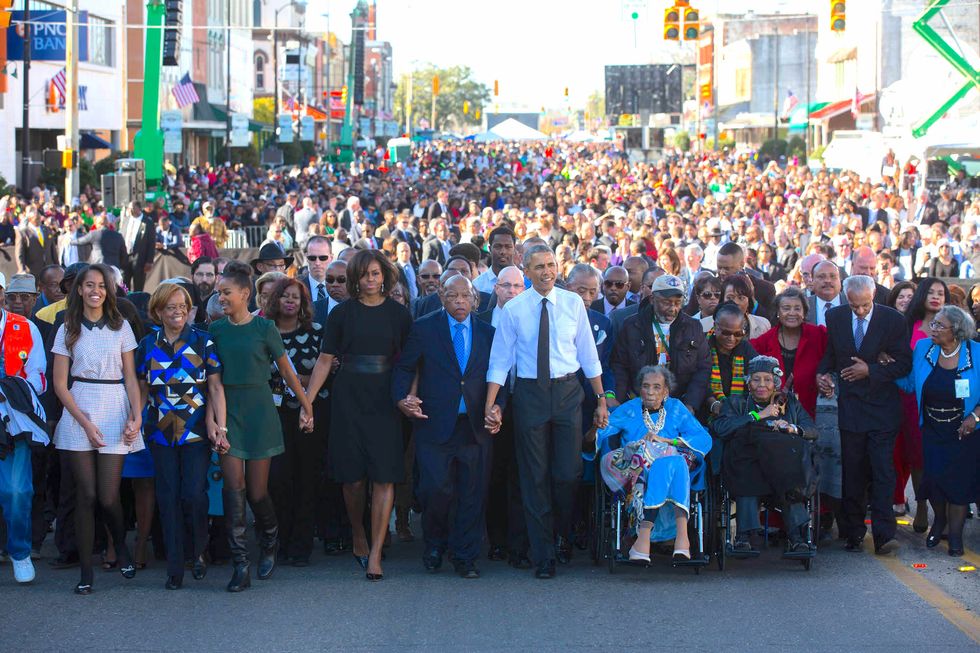 President Donald Trump posted his Thanksgiving message to Twitter Thursday morning. It was a photo of the President and First Lady earlier in the week, pardoning the turkeys in front of an audience in the Rose Garden of the White House.

“Melania and I wish all Americans a very Happy and Blessed Thanksgiving!” in a graphic. “HAPPY THANKSGIVING!” in all-caps was the text of the tweet.

Trump clearly is targeting only Americans – his message is not intended to apply to all people living in America. Advancing his self-professed policy of “nationalism” – some say, in general, white nationalism – non-citizen immigrants, regardless of legal status, are not included in his well-wishes.

The President also very intentionally injected a note of religious importance into his message: “a very Happy and Blessed Thanksgiving!”

It includes a photo of the Obama family helping to feed the needy and the homeless on the day before Thanksgiving, 2014.

The message: “Today, we give thanks for our blessings, give back to those around us, and enjoy some time — and turkey, and maybe a little football — with the ones we love. From the Obama family to yours, Happy Thanksgiving.”

It’s a much more active message, inspiring participation and the giving of thanks. He is leading by example. The message is one of service to others, an embrace of diversity, and caring for all, especially those in need.

The caption from the White House’s page for that photo reads: “Ahead of the Thanksgiving holiday, the First Family continued their annual tradition by participating in a service project. This year’s project was at Bread for the City — a Southeast Washington, D.C. charity dedicated to providing Washington’s most vulnerable residents with food, clothing, and other services.”

And while Obama used the word “blessings,” it is far more secular, as in something to be grateful for, as opposed to a “blessed Thanksgiving,” which is more religious and more passive.

Dressed in a sweater, President Obama is shaking the hand of a young girl.

Dressed in a suit and coat, President Trump is separated from the people, by the trappings of the presidency.

President Obama signs his message, “From the Obama family to yours, Happy Thanksgiving.”

The response to their messages is also of note.