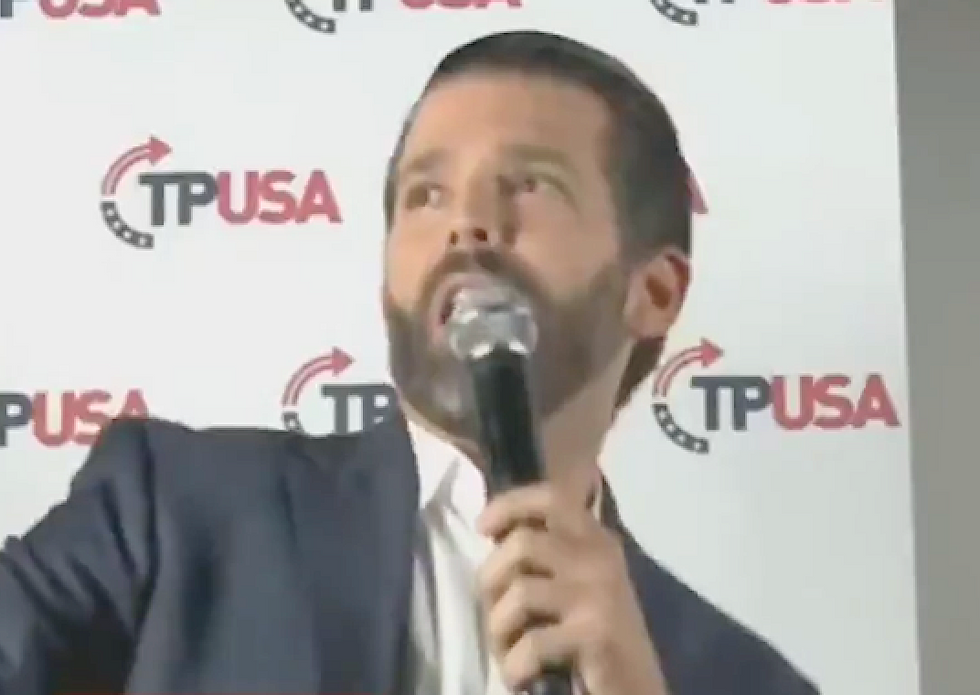 During an event at the University of California at Los Angeles this Sunday to promote his new book, Donald Trump Jr. was confronted by hecklers intent on disrupting the event, ultimately prompting him to storm off the stage with his girlfriend and Trump campaign senior adviser, Kimberly Guilfoyle.

But the protesters weren't the usual Trump detractors, namely progressive activists. They were a contingent of far-right Trump supporters who were upset that a Q&A session scheduled for the event had been canceled.

During the fiasco, Trump Jr. was initially under the impression that the hecklers were leftists and took an opportunity to lecture the crowd about civility.

“Name a time when conservatives have disrupted even the furthest leftist on a college campus,” he said to the crowd. “It doesn’t happen that way. We’re willing to listen.”

A member of the audience then shouted, “Then open the Q&A!”

“See what I mean?” Trump Jr. fired back. “And that is the problem. And the reason oftentimes it doesn’t make sense to do the Q&A is not because we’re not willing to talk about the questions, 'cause we do. No. It’s because people hijack it with nonsense looking to go for some sort of sound bite. You have people spreading nonsense, spreading hate, trying to take over the room.”

According to free speech lawyer Ari Cohn, Trump Jr's claim that the left has a monopoly on shutting down free speech simply isn't true.

"Hey @DonaldJTrumpJr," Cohn tweeted on Monday. "I actually once built a database that can show you many examples of it happening that way."

Hey @DonaldJTrumpJr, I actually once built a database that can show you many examples of it happening that way.… https://t.co/S9BYSdrEKr
— Ari Cohn (@Ari Cohn) 1573493593.0

With his tweet, Cohn included a link to the database, which includes numerous examples of progressive or left-leaning figures being shut down by conservative protesters at various events.

You can view the database here.

Boris Johnson: the man who always gets away with it?

He was once described as a "greased piglet", with an uncanny knack of wriggling free from politically perilous situations -- usually of his own making.

Now Boris Johnson could again need his powers of political escapology, after an internal report blamed his leadership for a culture of lockdown-breaking parties at Downing Street.

In the wake of the horrific massacre at Robb Elementary School in Uvalde, Texas on Tuesday, Democratic Rep. Alexandria Ocasio-Cortez blasted her party's leadership for supporting an incumbent in the state whose record and policy positions earned him an "A" rating from the National Rifle Association.

"On the day of a mass shooting and weeks after news of [the Supreme Court's impending decision to overturn Roe v. Wade], Democratic Party leadership rallied for a pro-NRA, anti-choice incumbent under investigation in a close primary. Robocalls, fundraisers, all of it," Ocasio-Cortez (D-N.Y.) wrote in a series of tweets.

Matthew McConaughey calls out gun owners after Texas massacre: 'We are failing to be responsible'

Matthew McConaughey called for action after a gunman murdered 19 children and two adults at an elementary school in the actor's hometown.

The Oscar-winning actor posted a statement on Twitter asking every American to “take a longer and deeper look in the mirror” to ask what "we truly value," and he said gun owners had proven once again "failing to be responsible for the rights our freedoms grants us."