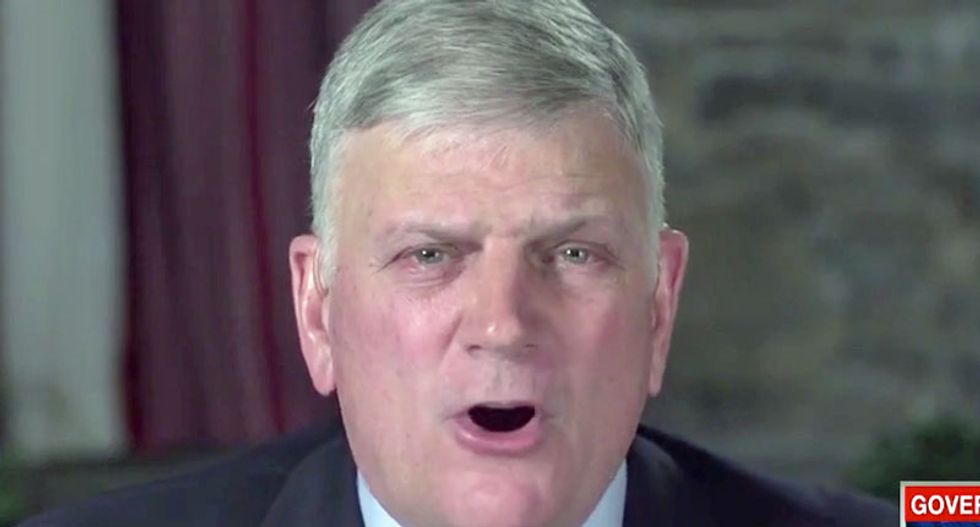 Franklin Graham, a top and influential supporter of Donald Trump, is once again rushing to defend the embattled President, as usual by twisting morality into a pretzel. Graham, who uses his famous late father’s reputation to portray himself as an icon of morality, now is now suggesting that extortion is OK and sidelining diplomacy and acceptable law enforcement methods to manufacture dirt on a political opponent “is a good thing.”

If that’s weren’t enough, Graham, who ministers via Facebook, is comparing the House’s legal and constitutionally-based impeachment inquiry – one that has been validated by a federal chief judge – to an “inquisition.” Inquisition is certainly a hot-button word, especially when used by those who work in the business of religion, given its association with the Inquisition, a medieval Catholic Church torturous war on science and truth, or, as the Pope called those virtues, “heresy.”

On Thursday, barely hours after the House voted to pass impeachment inquiry procedures,  Graham declared it was “a sad day for America.”

“Our politics in this country has hit a new low,” he wrote. “Nancy Pelosi and her followers in Congress have weaponized the impeachment process,” said Graham, falsely, while disrespectfully ignoring Speaker Pelosi’s title and that she and every Member of Congress are duly-elected representatives of the people of the United States.

“In my opinion, asking another country to investigate corruption is a good thing—not a bad thing,” Graham claimed, contrary to law. “This is just another attempt to tarnish and embarrass the President before the next election. We have so many problems in this nation that need to be addressed. Instead the Democrats are fixated on only one thing—removing President Donald J. Trump from office.”

“Pray for President Trump today, for God to give him wisdom, protection, and guide each and every step he takes. I pray that he and Melania will sense the presence of the Lord through this unjust inquisition.”