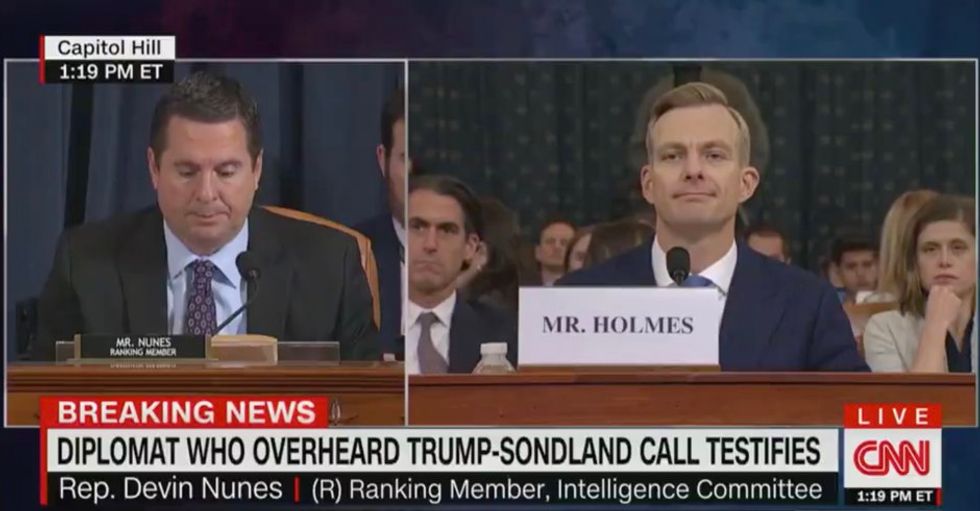 Intelligence Committee Ranking Republican Member Devin Nunes Thursday afternoon appeared stunned when he questioned a U.S. State Dept. official during the impeachment hearings and did not get the answer he anticipated.

Rep. Nunes has been spewing far right wing conspiracy theories during each impeachment hearing over the past two weeks, including the thoroughly debunked lie that Ukraine – not Russia – attacked the U.S. 2016 election.

(Earlier one of today’s witnesses, Dr. Fiona Hill, publicly lambasted the spreading of the false Ukraine conspiracy theory as she sat just feet away from Nunes. The video is here.)

Nunes asked David Holmes, who is the State Dept.’s counselor for political affairs at the U.S. Embassy in Ukraine about the “black ledger.”

That line of questioning did not go well for Nunes.

Nunes asked if Holmes had “ever heard of the black ledger.”

“I have,” Holmes replied.

“The black ledger – is that seen as ‘credible’ information?” Nunes asked.

“The black ledger is credible?”

Nunes did not look pleased.

“Bob Mueller did not find it credible. Do you dispute what Bob Mueller’s findings were? – They didn’t use it in the prosecution or in the report.”

“I’m not aware that Bob Mueller did not find it credible. I think it was evidence in other criminal proceedings. Its credibility was not questioned in those proceedings, but I’m not an expert on that.”

As Nunes goes back to the well of Ukraine 2016 conspiracy theories, Holmes shoots down his nonsense regarding the b… https://t.co/4MFj1AJHSq
— The Moscow Project (@The Moscow Project)1574360705.0

Holmes is correct – it was used as evidence in prosecutions (see below).

The black ledger is a register of off-the-book payments made by the corrupt now-former ruling party of Ukraine – not today’s ruling party.

It contains details of 22 payments allegedly made to Paul Manafort, totaling $12.7 million, by his former client, the ex-President of Ukraine, Viktor Yanukovych. Manafort later became Donald Trump’s election campaign chairman. When the ledger was exposed Manafort was forced to resign from the Trump campaign. He is now in prison, serving a 90-month federal sentence.

Mueller actually did find the black ledger credible, as The Washington Post reported one week ago. It was used as evidence in Mueller’s indictment against Manafort.