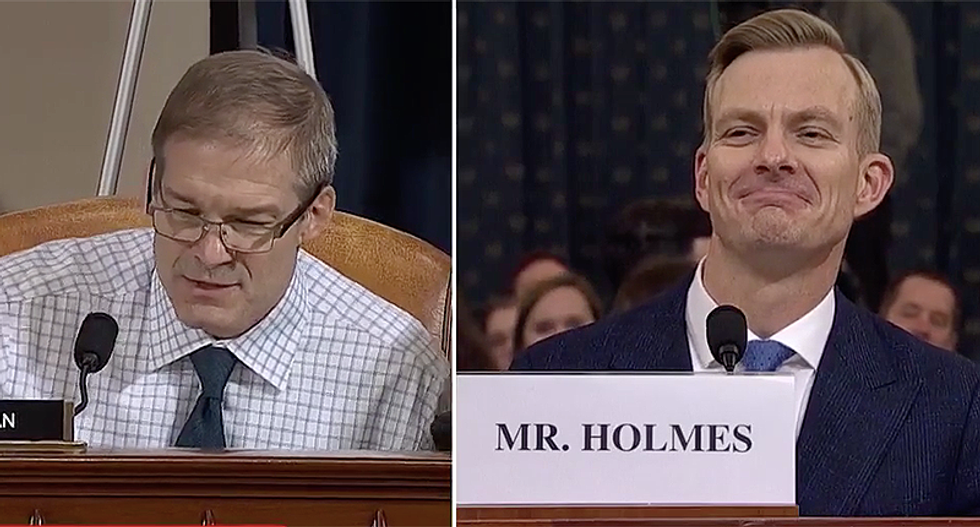 Rep. Jim Jordan (R-OH) asked undersecretary of State for Political Affairs David Holmes about his statement that he told several people about his concerns with President Donald Trump's call with Ukraine President Volodymyr Zelensky. Ambassador Bill Taylor did not testify that he spoke to Holmes about the call.

Jordan then went on to cite all conversations that Taylor mentioned, to illustrate that Taylor never mentioned Holmes and question whether Holmes was lying.

"May I answer the question?" Holmes asked.

"I'll get to you in a second," Jordan said, and the audience laughed.

"He can't remember a call he had with a guy he works with every single day!" Jordan screamed into the microphone. "Why?"

"Yes, sir, so, immediately when I went back to the embassy after this lunch on the 26th I told my direct supervisor I would have told Ambassador Taylor immediately except he was on the front lines that afternoon," said Holmes. "I then went on as they testified my vacation on Saturday. I came back the following Monday and on Tuesday I was back in the ambassador's office where I refer to the call in that week plus that I was away."

He explained that he assumed the deputy chief would have informed other people about the specifics on the call while he was out of the office.

"So, my recollection is when I did refer to the call in that meeting that Ambassador Taylor nodded knowingly as though he had been briefed on it. So, I referred to the call and I mentioned some of my takeaways from the call," Holmes continued. "And at the time, the main take away from the call was that the president doesn't care about Ukraine. So, we're going to have a tough road ahead to convince him that it's important enough to schedule an Oval Office meeting for President Zelensky and ultimately to release this hold on security assistance."

Jordan attempted to interject, but Holmes stressed he had one more key point.

"Throughout this time, as I testified, we were trying to find a formula -- things we could do with Ukrainians that would convince the president that they were worth talking to," Holmes went on.

Jordan cut in to say that the takeaway from Taylor could have been that it wasn't a big deal and he didn't remember because the summary of the call was already out.

"No, I had --" Holmes began to say but was interrupted by Jordan again.

"We had the Trump/Zelensky transcript had been out for two months," Jordan went on, yelling.

"Sir, I believe that when I --" Holmes again attempted to clarify.

"If you're repeatedly bringing this conversation up to everybody any time there is a talk about Ukraine, you recall this conversation, maybe it was the transcript, the call happened on the July 25th, that's four months ago," Jordan shouted. "The transcript had been out for two months. Maybe the ambassador thought there is nothing new here. But, shazam, last week you come forward with supposedly this new information and nothing different in there than what we had on the transcript. Maybe that's the reason their star witness, their first witness didn't bring it up. But you're their closing witness because you overheard the president talking to Ambassador Sondland."

"You may take as long as you need," Chairman Adam Schiff (D-CA) interjected.

"Thank you, sir. I believe that Ambassador Taylor did already knew when I briefed him when I returned from vacation on the 6th," Holmes continued. "It was not news for him that the president was pressing for a Biden investigation."

"That's not what I asked!" Jordan cut in again. "I asked why he didn't share with us."

"Mr. Jordan, please do not interrupt the witness anymore," Schiff admonished the Congressman. "Mr. Holmes, the gentleman's time has expired but yours has not. You can answer the question."

Holmes uncomfortable laughed along with some in the audience.

"OK, it's exactly my point," he continued. "I briefed the call in detail with the deputy chief, we waited a week, I come back, I referred to the call and everyone is nodding, 'of course that's what's going on. Of course, the president is pressing for a Biden investigation before he'll do these things the Ukrainians want.' There was a nodding agreement. No, because everyone by that point agreed. It was obvious what the president was pressing for. And Ambassador Taylor, as you outlined --"

Jordan cut in again: "But he didn't share it with us."

"But sir, my vivid recollection of an event that I was involved with was a touchstone experience to me, validated --"

"And," Jordan tried to cut in again.

"Validated what we believed," Holmes closed.

Watch the full video of the exchange below: