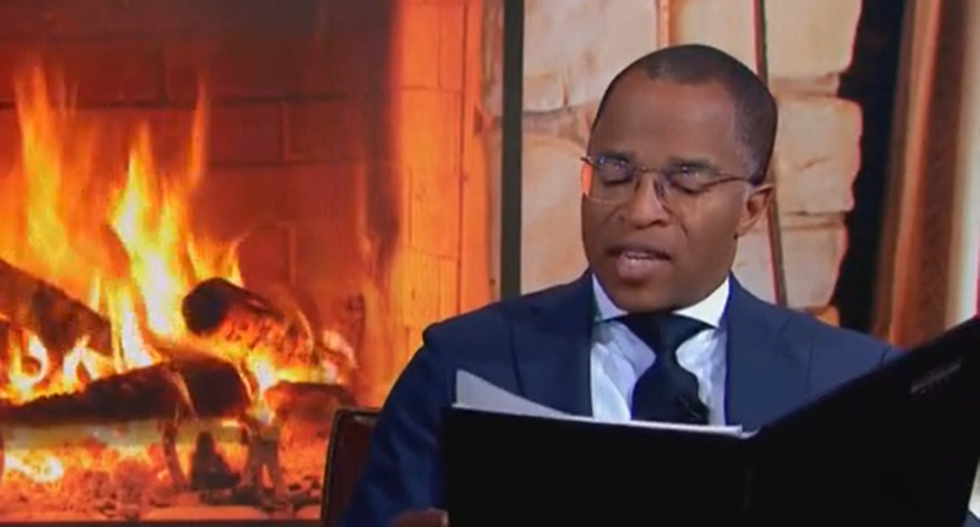 On Saturday's edition of MSNBC's "AM Joy," anchor Jonathan Capehart responded to President Donald Trump's suggestion that he will read the transcript of his call with Ukraine President Volodymyr Zelensky in a "fireside chat" with the American people — by holding a fireside chat of his own.

"The phone call was so perfect, according to Trump, that he told the Washington Examiner that he wants to read it — that is, the edited notes of the call — in a live televised fireside chat. Like FDR did in the '30s and '40s," said Capehart. "Trump's version of the fireside chat might go something like this."

"July 25th, 2019," said Capehart, reading from a binder next to a roaring fireplace. "President Zelensky begins, 'We are almost ready to buy more javelins from the United States for the defense purposes.' Trump replies, 'I would like you to do us a favor though, because our country has been through a lot. And Ukraine knows a lot about it. I would like you to find out what happened with this whole situation with Ukraine. They say CrowdStrike, dot dot dot, I guess you have one of your wealthy people, dot dot dot, the server, they say Ukraine has it. There are a lot of things that went on. The whole situation. I think that you are surrounding yourself with some of the same people. I would like to have the attorney general call you or your people and I would like you to get to the bottom of it.'"

"Zelensky responds in part, 'I guarantee as the president of Ukraine that all the investigations will be done openly and candidly. That I can assure you,'" continued Capehart. "Trump later says, 'the other thing, there is a lot of talk about Biden's son, that Biden stopped the prosecution and a lot of people want to find out about that. So whatever you can do with the attorney general would be great. Biden went around bragging that he stopped the prosecution, so if you can look into it, dot dot dot, it sounds horrible to me.'"

"Truly, a perfect call," he concluded.