WATCH: Woman tells Dr. Phil she is Putin’s lover -- and is helping Russia and Trump rule the world 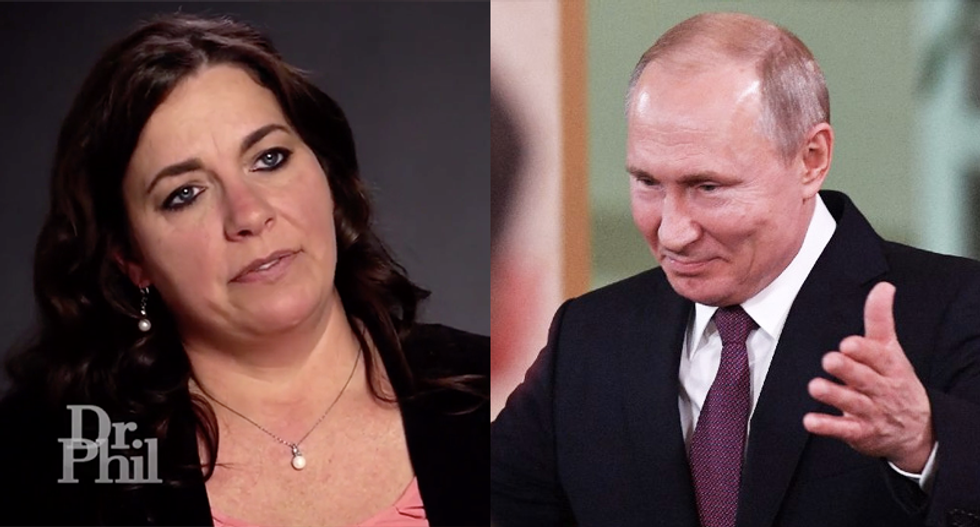 Television psychologist Dr. Phil McGraw welcomed a woman and her family on his show Monday that believes that she's in a relationship with Russia President Vladimir Putin and is helping him and President Donald Trump solve world issues.

A concerned family joined the show saying that their mother, Jennifer, doesn't care about them because she believes she's doing the work of "the Lord" to save the world with Putin and Trump.

While Trump has denied that he and Putin work together on running the United States and other global concerns, but many of Trump's supporters believe otherwise. MSNBC ran a special on the Q-Anon conspiracy theorists Monday, many of whom believe their site is the only factual news site and reports from any other outlet are lies.

Jennifer also believes that world leaders are following her on social media because they're aware she is a kind of prophet who can deliver information. She said that she and Putin communicate through the color of his ties.

According to her family, Jennifer believes she will soon be Putin's wife and "Mother of Russia." She's had visions that she's going to give birth to a little girl that would be his child and she's already started buying clothes for the child.

She explained that she frequently has prophecies and visions, one of which showed her being picked up by the presidential plane and arriving back in Moscow with her. She said that when she saw Putin wearing his cross necklace, she knew she had to stop everything she was doing to help him.

She said that she worked on the Trump campaign, though that has not been corroborated by the campaign. On at least two occasions she has contacted the government saying she feared Trump would be assassinated and was concerned for his well-being.

She has yet to be diagnosed with a personality disorder, but will likely be given professional help long-term.

Her family is determined to get her back and help her to stop the visions. Jennifer said that she loves her dogs more than her children.

You can see clips from the episode below: