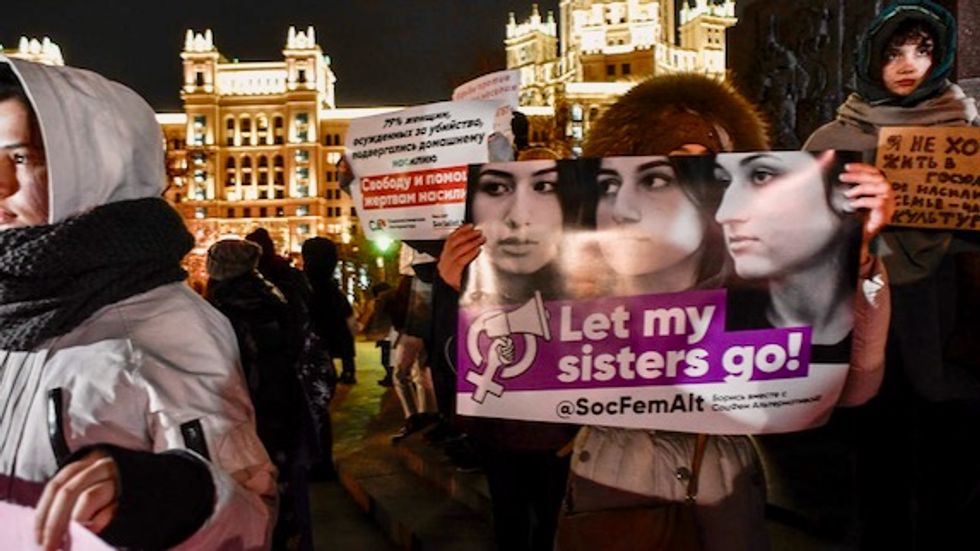 Investigators said Tuesday that two sisters who killed their father after years of abuse should face murder charges, in a case highlighting Russia's dire record on domestic violence.

Their case has sparked protests and calls for the women to receive psychological help instead of being sent to prison.

There is no specific law against domestic violence in Russia and activists have long accused authorities of turning a blind eye to abuse.

Russia's Investigate Committee said in a statement on Tuesday that it had completed a probe into the killing and was recommending charges of premeditated murder against the two older sisters, Krestina and Angelina, now 21 and 19.

The probe established that the sisters stabbed their father with a knife and beat him with a hammer, causing fatal injuries.

It pointed to "mitigating circumstances" but said the two older sisters were of sound mind and aware of their actions at the time of the attack.

They face up to 20 years in prison if convicted.

Lawyers and activists say the teenagers were forced to act to save their lives, pointing to poor legal protections for abuse victims.

Mari Davtyan, a lawyer for Angelina, told AFP the case should not go to trial because the sisters "used reasonable force in self-defense".

Alexei Liptser, a lawyer for Krestina, said the sisters were likely to be convicted despite the campaign in their defense.

"We know that if investigators decide something this is simply a matter of time," he told AFP, pointing to Russia's extremely low acquittal rates.

He said the two sisters were asking for a jury trial, adding: "A trial by jury can not only soften the punishment but also acquit."

The three sisters now live in separate homes and are forbidden to communicate with each other.

Russia decriminalized all but the gravest types of domestic violence in 2017. Police do not normally intervene, even in severe cases.

"The state in the form of its various institutions still does not recognize the problem and is not prepared to protect the lives and health of its citizens," she told AFP.

"The Investigative Committee wields the law against those who have found themselves in a monstrous situation and had to fight for their lives," Rivina said.

Ultra-conservative groups have campaigned against the bill, saying it will destroy families and the powerful Russian Orthodox Church has also opposed it.