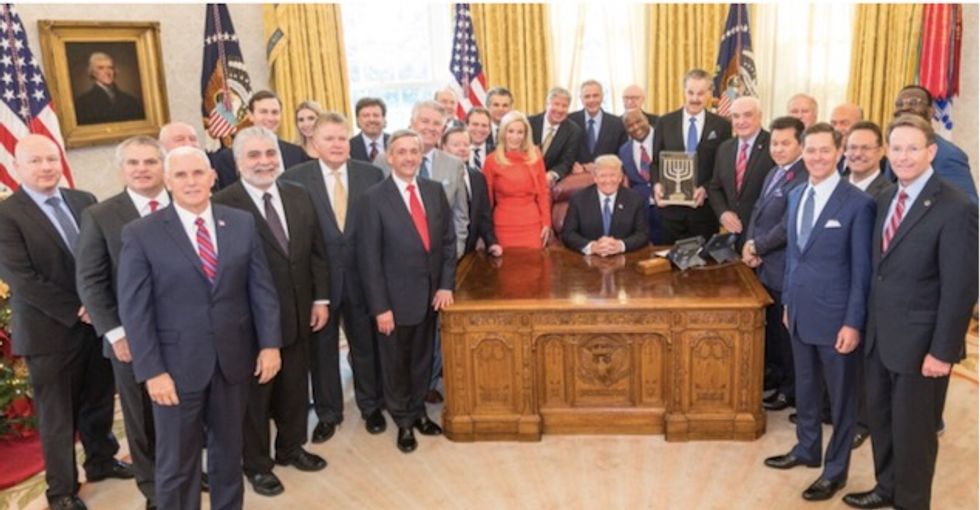 One of the most puzzling phenomena of the Trump era is his die-hard support from evangelical Christians -- especially puzzling since Trump's reputation as a "thrice-married, swindling, profane, materialistic, self-styled playboy" starkly contradicts the "family values" narrative famously disseminated by the religious right. In a column for Rolling Stone published this Monday, Alex Morris tries to shed some light on this contradiction.

According to Morris, it all started with a September meeting in 2016, six weeks before the election, where an audio recording of the meeting revealed how evangelical leaders handed Trump a mandate that he promised to fulfill.

"He would end the contraception mandate of Obamacare; ... he would select only anti-choice judges; ... he would do away with the Johnson Amendment, which prohibits tax-exempt entities from endorsing politicians; ... he would support prayer in school; ... he would oppose any bill that pulled funding from Christian schools that were charged with discrimination; ... he would keep transgender people from using the 'wrong' bathrooms and locker rooms; ... and he would protect Israel, following the biblical pronouncement that nations that do so would be blessed ('[Obama’s] been the worst thing that’s happened to Israel ..."

Despite Trump's newfound allies in the evangelical movement, he never bothered to put out the image that he was a true believer. But that didn't matter -- it was Trump's perceived devotion to their cause that had evangelicals sold. As Morris points out, close to 81 percent of white evangelicals cast their ballots for him on election day. Fast forward to 2019, 82 percent of evangelicals would vote for Trump if the election were held today. "Two-thirds believe that he has not damaged the decency of the presidency, 55 percent agree with Sarah Huckabee Sanders that 'God wanted him to be president,' and 99 percent oppose impeachment," Morris writes.

While solidarity with their movement is one explanation for Trump's evangelical support, what's not easily explainable is the fact that many evangelicals are quick to claim Trump is a believing Christian. One of the reasons could be how Trump willingly plays into the "us-versus-them" mentality that "mobilized the Christian base fiscally and politically."

"...any leader who tackled the wedge issues with Trumpian ferocity was on the side of righteousness."