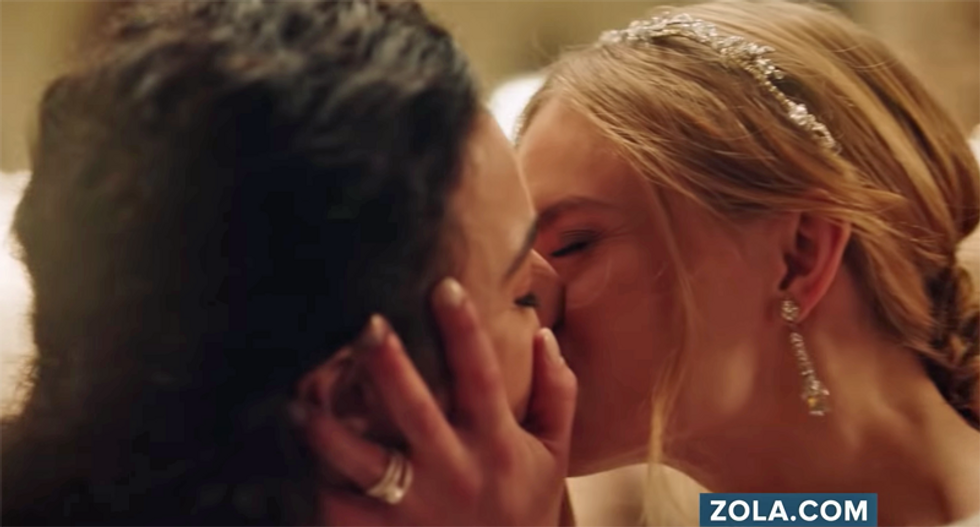 The Hallmark Channel is facing a public boycott after caving to an anti-LGBTQ group that demanded the network not show an ad showing two women marrying each other.

"The Hallmark Channel pulled four TV ads featuring brides kissing each other on Thursday after a targeted campaign by a conservative group," The New York Times reported Saturday.

"Asked to explain why the ads had been rejected, an employee of Hallmark’s parent company said the channel did not accept ads 'that are deemed controversial,' according to an email exchange shared with The New York Times. A spokesman for Hallmark said the women’s 'public displays of affection' violated the channel’s policies, but he declined to comment on why a nearly identical ad featuring a bride and groom kissing was not rejected," the newspaper reported.

"The series of six ads, for the wedding planning website Zola, first appeared on the Hallmark Channel on Dec. 2. The ads, which feature several configurations of couples, all offer variations on the same concept: While standing at the altar, couples ponder whether guests would have arrived on time and bought them better gifts if only they had created a custom wedding website with Zola," The Times explained.

The Hallmark Channel was harshly criticized for the decision and #BoycottHallmark trended nationwide on Twitter.

#boycotthallmark I will be cancelling my subscription to your channel, entering your store or buying your products… https://t.co/ivyFhQRYcN
— J-Lee (@J-Lee) 1576363371.0

.@hallmarkchannel you do realize that same sex marriage is the law of the land (see Obergefell v. Hodges). what a h… https://t.co/5q4VtNHYJN
— Dwight Williams (@Dwight Williams) 1576362795.0

We will not be watching any more Hallmark movies this season...I hope that the talent will speak out about this rid… https://t.co/IboUclzmzw
— TheDemars (@TheDemars) 1576359157.0

It’ll be a shame if this commercial Hallmark pulled after receiving bigoted complaints by the group One Million Mom… https://t.co/TxOs5LUsuY
— Eugene Gu, MD (@Eugene Gu, MD) 1576367528.0