Christmas in the age of Trump: How the president and his followers have weaponized the holidays 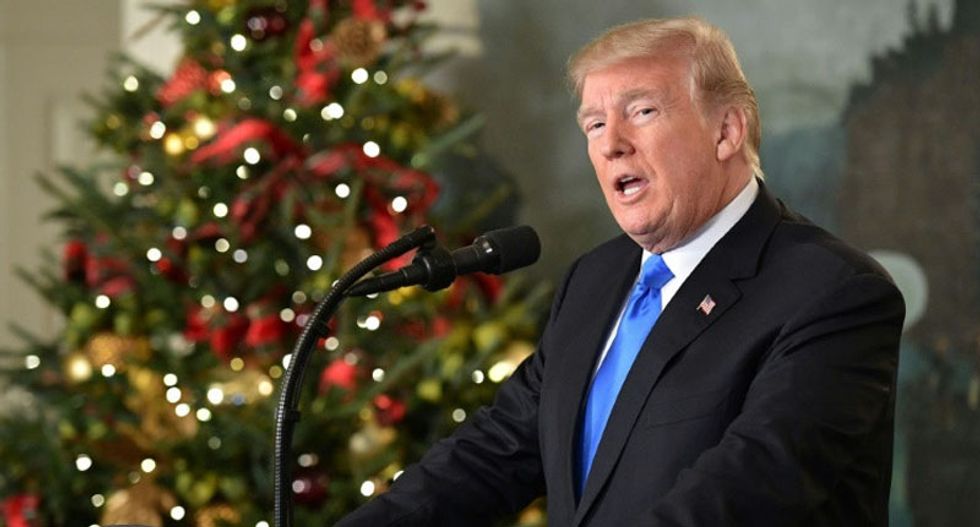 Christmas and the holiday season are a time of friends and family, gift-giving, and for many people personal reflection and prayer, as well as charitable and other good deeds.

This fourth Christmas in the Age of Trump is also a time of cruelty. The Trump regime’s fascism and racial authoritarianism do not rest on Christmas or any other holiday.

Tens of thousands of nonwhite migrants and refugees were imprisoned in Donald Trump’s concentration camps and other facilities in 2019. Many of the children taken from their parents may never be returned to their parents or other relatives.

The Malthusian social-Darwinist Scrooge and his Republican Party continue to gut programs such as food stamps, assistance for the disabled, health care, and other remnants of the social safety net, while giving the very richest Americans trillions of dollars in tax cuts. Trump’s regime continues its assault on the rule of law, the Constitution and human rights.

Trump’s militarism continues unabated around the world while he parties with war criminals at his Florida Mar-a-Lago resort.

This behavior should be antithetical to Christians and others who honor the teachings of Jesus Christ and his examples of caring for and defending the poor, the weak, the marginalized and the vulnerable. On Jesus Christ’s “birthday,” Trump and his regime’s cruel behavior should be viewed by all Christians as especially repulsive.  But of course, a large majority of white Christian evangelicals have embraced Trump’s wickedness as their own.

How do these right-wing Christians resolve what ought to be a profound state of cognitive dissonance?

Trump is giving them at least the outlines of the Christian nationalist American theocracy they have long yearned for. In turn, they have rewarded him Trump with near-total loyalty.

To that end, white Christian evangelicals twist their mythology to make Donald Trump into some form of king or prophet who is actually doing God’s work. Trump certainly agrees as he has proclaimed that he is in fact the “chosen one.”

Racism has a powerful impact on a person’s thinking and morality, and this is especially true of white Christian conservatives. Public opinion and other research shows that they possess high levels of hostility and other negative sentiments toward nonwhite people, especially immigrants and refugees. Writing at CounterPunch, the Rev. William E. Alberts and Amy Eva Alberts Warren explore this:

For many Christians who believe they are “among those whom he favors,” it is not about creating peace among people, but gaining power over and imposing their assumed biblically revealed truths on those believed not to be “favored.” Here the “Prince of Peace” is transformed into a divisive and predatory pied piper. The result is not peace, but sectarian discord, and, ironically today, unending wars in the name of peace.

Diversity is a threat to many traditional Christians .... President Donald Trump has used Christmas to stoke the fear and hatred of those Christians who believe their one true faith and traditionally favored political position are being threatened by immigrants and democracy’s demand for real inclusiveness and equality. Trump created an issue where none existed, except in the minds of those Christians who need to be “favored.” ...

President Trump turned “Merry Christmas” into an exclusive white Christian greeting, made palatable for many by him repeatedly denigrating former black president Barack Obama as an illegitimate imposter, who avoided saying “Merry Christmas,” which was not true. And Trump fortified this traditional white-conditioned Christmas mentality with bans against Muslims and walls against immigrants — the very contradictions of the story of immigrant-like travelers, Joseph and Mary, looking for a safe place to bed down and give birth to their child. In the face of Trump’s brutal policy of separating immigrant children from their mothers and fathers at the Mexican border, his wanting to “restore” people’s freedom to say “Merry Christmas” again is morally repulsive.

Donald Trump election was largely the result of racism (along with “hostile sexism”). Racism keeps him in power. Racism will more than likely be a deciding factor in the 2020 presidential election. Racism against nonwhites (especially immigrants and refugees) is a value that Trump and his white evangelical supporters share.

Of course, there is also Donald Trump as a proud and unapologetic sinner. Trump’s embrace of unconscionable behavior is so great that even the conservative publication Christianity Today was recently forced to condemn him.

The impeachment hearings have illuminated the president’s moral deficiencies for all to see. This damages the institution of the presidency, damages the reputation of our country, and damages both the spirit and the future of our people. None of the president’s positives can balance the moral and political danger we face under a leader of such grossly immoral character… .

That he should be removed, we believe, is not a matter of partisan loyalties but loyalty to the Creator of the Ten Commandments.

To the many evangelicals who continue to support Mr. Trump in spite of his blackened moral record, we might say this: Remember who you are and whom you serve. Consider how your justification of Mr. Trump influences your witness to your Lord and Savior. Consider what an unbelieving world will say if you continue to brush off Mr. Trump’s immoral words and behavior in the cause of political expediency.

As Galli has admitted, such condemnations will not move the mass of Trump’s white right-wing Christian supporters. His cult has largely conquered their churches.

Trump’s fascist machine of cruelty and evil does not operate on its own. Real people manipulate its gears. Some of them are senior officials such as White House adviser Stephen Miller, a known white supremacist. Others are petty low-level bureaucrats. Then there are the individual functionaries who do the work of physically enacting the Trump regime’s violence and other cruelty.

These are Trump’s enforcers in ICE, the Border Patrol, and other agencies. Most of these people no doubt regard themselves as Christians and are celebrating this holiday.

Perhaps Trump’s enforcers need better role models for the values of charity and kindness — especially to refugees, migrants and other travelers in need of help?

One such potential role-model is Scott Warren, A member of the faith-based human rights group No More Deaths, Warren has been providing water, food, shelter and other assistance to the migrants and refugees who brave the dangers of the Arizona desert in their journey to America for a better life. Warren was recently indicted by the Trump regime's federal prosecutors for his good work. In November, a jury in Arizona acquitted Warren of all but one charge, a misdemeanor.

Christians who live their faith have a special obligation to resist Donald Trump. One can of course attend protests and contribute money, time, skill, and other resources to those individuals and groups who are working to defeat Trumpism.

A Christianity of lived action and faith through corporeal politics (what has been described as “embodied solidarity”) necessitates direct action. This is true in more routine times as well as during the calamity that is the Age of Trump.

At the American Prospect, Charli Carpenter shared what it was like to speak with the Border Patrol and other guards who work at Trump’s concentration camps, in an effort to awaken their sense of human decency:

Americans can engage these guards and remind them of the Nuremberg principles. We can remind them they are vulnerable to prosecution if they follow orders, but have power — and moral courage — when they resist. Activists can laud heroes like former CPB agent-turned-activist Jenn Budd, who resigned her post due to the cruelty she witnessed and has been speaking out ever since. Citizens can consider the other kinds of assistance that would make it easier for people working in these places to speak out — or turn in their badges — rather than remain loyal to a regime bent on violating the human rights of civilians fleeing conflicts in their home countries.

Carpenter further explained that such conversations "require respectful engagement," rather than confrontation or obvious protest:

When I spoke with these men, we talked about the law, the Office of the Inspector General's Report on overcrowding at their facility, and trauma science, but we also just talked about our families. “Do you have children?” I’d ask. “What do you tell them about what they see in the newspaper? What do you want me to tell my child? What would you want for your family if you were fleeing a war zone? Would you want your child treated like these families here are treated? Even if you’re just following orders, do you personally think this is right?”

The guards I met were remarkably willing to struggle through these questions. They were also surprisingly willing to cede my points, check out my sources, and reconsider their own power. These conversations lower their defenses, allow us to find common ground, and plant seeds of humanity that can make a difference inside the walls, if only at the margins.

Carpenter’s plan of action can be enacted in the spirit of Christmas and the holiday season, and then every day thereafter.

In the malignant reality and state of moral inversion that is TrumpWorld, there are stories of a “War on Christmas.” The ghosts and demons in this story are Muslims, Democrats, liberals, Michelle and Barack Obama, Hillary Clinton, Latinos and Hispanics, black and brown people, atheists, gays and lesbians, feminists, “Black Lives Matter,” climate protesters and any other groups or individuals deemed to be Other by Trump.

Of course, in actually-existing reality there is no War on Christmas. Trumpers and right-wing evangelicals are fighting nonexistent phantoms, summoned by their own collective narcissism and shared delusions.

In the same article from CounterPunch quoted earlier, the authors observe that “President Trump has given 'favored' biblically-believing Christians 'a right to declare their hate.' And, ironically, during Advent, the code words for that hatred are 'Merry Christmas,' which should be about peace among all people, not divisive preferential treatment for Christians.”

While celebrating Christmas in 2019 it would be useful if the American people (especially Trump-loving “Christians”) were to reflect on how history will judge them.

Despite conflicts over Christianity, many Germans accepted the Nazification of Christmas. The return to colorful and enjoyable pagan “Germanic” traditions promised to revitalize family celebration. Not least, observing a Nazified holiday symbolized racial purity and national belonging. “Aryans” could celebrate German Christmas. Jews could not.

The Nazification of family celebration thus revealed the paradoxical and contested terrain of private life in the Third Reich. The apparently banal, everyday decision to sing a particular Christmas carol, or bake a holiday cookie, became either an act of political dissent or an expression of support for national socialism.

History does not repeat itself, but, as the old saying holds, it sure does rhyme sometimes. This truth feels especially resonant on Christmas Day in the Age of Trump.