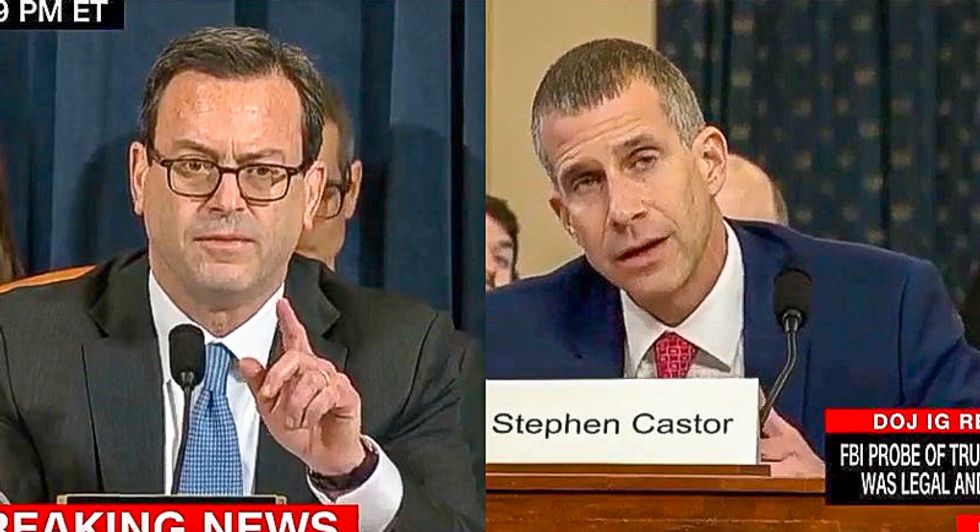 Opposing counsel for Democrats and Republicans faced off at a House impeachment hearing on Monday.

Republican counsel Stephen Castor, who appeared as a witness, complained that he was not being asked enough questions by Democratic counsel Barry Berke.

During questioning of a Democratic counsel, Berke noted that President Donald Trump was more concerned about personal gain than corruption in telephone calls with Ukraine's president.

"May I add something there?" Castor asked.

"Are you not going to let him answer?" one Republican member cried out.

"No!" Judiciary Committee Chairman Jerry Nadler (D-NY) said as he repeatedly brought down the gavel.

"The time is the questioner's and he can ask questions to whoever he wants," Nadler proclaimed.

At that point, Castor conceded the floor to Berke, who was allowed to finish his questioning of the Democratic witness.

The second major professional golf tournament of the year, the PGA Championship, takes place this week at Southern Hills Country Club in Tulsa, OK. It wasn't supposed to be that way.

Former President Donald Trump's Bedminster, NJ golf club originally was slated to be the venue - that is until the sport's governing organization decided it didn't want to be associated with someone who incited a riot at the U.S. Capitol in an effort to illegitimately retain the presidency.

The mass shooter who killed 10 people in Buffalo, New York, on Saturday posted a racist manifesto online before targeting a majority-Black neighborhood. His writings took heavily from conservative conspiracy theories that white people were in danger of being replaced by people of color. This so-called Great Replacement conspiracy theory has been promoted by major far-right media figures including Tucker Carlson of Fox News. “What it does is create a dynamic where believers view immigrants and nonwhite people as an existential threat not only to themselves physically but to their position in society,” says Nikki McCann Ramírez, associate research director at Media Matters for America, who has researched how Carlson uses his show to launder white nationalist ideology. We also speak with prominent antiracist scholar Ibram X. Kendi, who says mainstream conservatives are increasingly parroting extremist talking points.