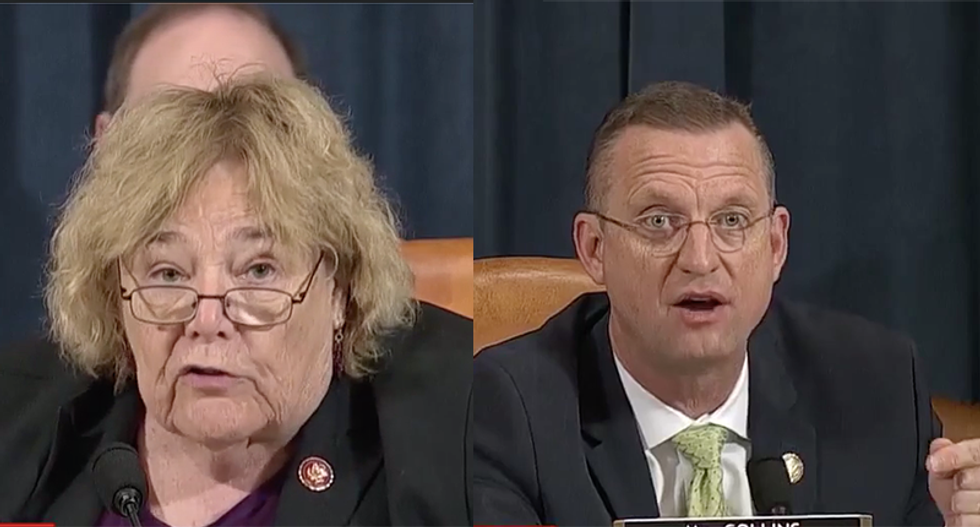 Rep. Zoe Lofgren (D-CA) fact-checked a Republican claim that no one died while President Donald Trump was withholding aid to Ukraine.

So far more than 14,000 Ukrainians have died and 1.5 million people have been displaced while the country tries to defend itself from the Russian invasion. Lofgren noted that the most "deadly" day on the battlefield for Ukrainians was at the end of August while they were desperately waiting for the necessary aid Congress agreed to give them.

Republicans have argued that former President Barack Obama didn't give weapons to Ukraine when he had the opportunity when Trump did. In fact, Congress was responsible for passing an aid package in Feb. 2019 to the country that delivered missiles and other military assistance to the country. That's what makes the withholding of aid all the more problematic. While presidents can withhold aid, it must be done lawfully. Trump didn't do that in this case, The Washington Post reported.

Under Section 503 of the Foreign Assistance Act, a president “is authorized to furnish military assistance, on such terms and conditions as he may determine, to any friendly country or international organization, the assisting of which the President finds will strengthen the security of the United States and promote world peace.” Section 116 of the act states that the president has authority to withhold military or economic assistance “to the government of any country which engages in a consistent pattern of gross violations of internationally recognized human rights.”

There were no suspicions of a pattern of gross human rights violations on the part of Ukraine, nor did Trump cite them as a reason for withholding the aid. He made it clear that his aid was conditional on the "favor" he asked for in the July 25 call. Only after Ukraine agreed to announce the investigation on CNN and the whistleblower came forward did Trump ultimately release the aid in September, a full six months after it was allocated by Congress.

While the aid was released in September, one month after the fact, the aid still hadn't arrived.

"Tens of thousands of Ukrainians, like Markiv, volunteered to help fight the Russia-backed separatists in the east. Many of them were sent to the front line wearing sneakers and without flak jackets and helmets, let alone rifles and ammunition," The Times reported. "Ukrainians across the country organized in an unprecedented, united civil movement not seen since World War II to raise money to supply their ragtag military with everything from soldiers’ boots to bullets."

Rep. Doug Collins (R-GA) said that deaths happen in a war and the lack of aid had nothing to do with the uptick in deaths in Ukraine.