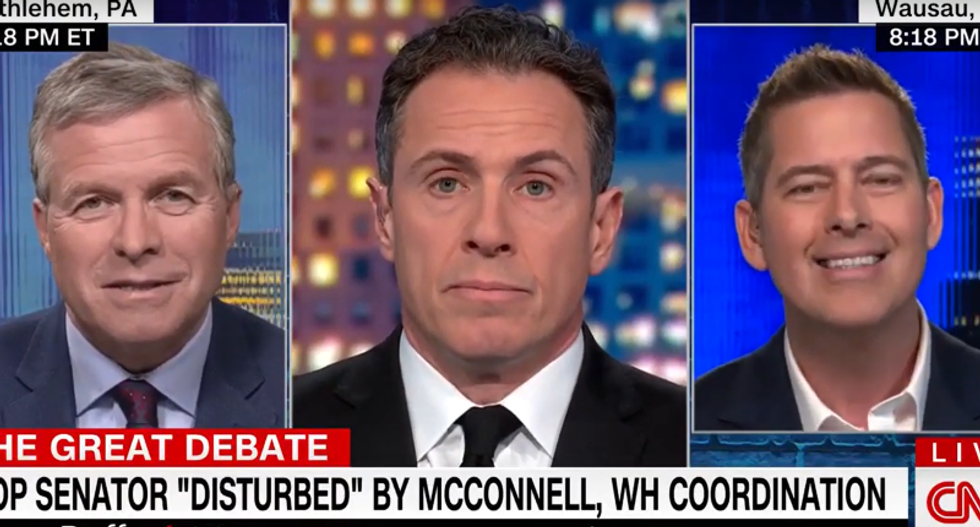 On Thursday, CNN's Chris Cuomo brought together two former GOP lawmakers, Reps. Sean Duffy (R-WI) and Charlie Dent (R-PA) to discuss the GOP's continuing loyalty to Trump — and Dent, a longtime critic of the president, laid into Duffy's glib defense of the president.

"People don't gravitate towards Donald Trump because they fear him, they gravitate towards him because they love him," said Duffy. "They love the policies that he's fighting for. We're a party of lifers. We believe in life, not late-term partial-birth abortions. We believe in secure borders. We believe in fair trade. We believe in limited government. Donald Trump has fought for all those things. And that's why people love him. No one's afraid of him ... I don't think it's fear at all, Chris, it's love and affection for the president who has stood up for principles Republicans believe in. We've had leaders and presidents who have said, I agree in all these things you Republicans believe in, they run on it, and then they don't do it when they get into office. He's kept his promises."

"Kept his promise to pass a tax cut he wouldn't pay for and a trade war that makes a mockery of what Republicans have believed in for 50 years," said Cuomo. "Charlie, do you buy the love thing?"

"No, I don't," said Dent. "Is there a core element of the party completely enthralled with Donald Trump? Yes. But if I had a nickel for every time a Trump supporter told me they have reservations on Donald Trump but are willing to take a risk on him, they knew he was a potential problem. There are a lot of Republicans out there who support this man very reluctantly and would prefer to have somebody else."

"And by the way, Sean, where I disagree with you, I don't think Donald Trump is very principled at all," added Dent. "I think he's completely transactional, with the exception of two issues, trade, where he's a protectionist, and immigration, where he is a restrictionist. Everything else, he's transactional. This trade policy violates every core tenet of what we stood for as Republicans. I thought that was a core principle, not this crony capitalism that protects the few at the expense of the many."