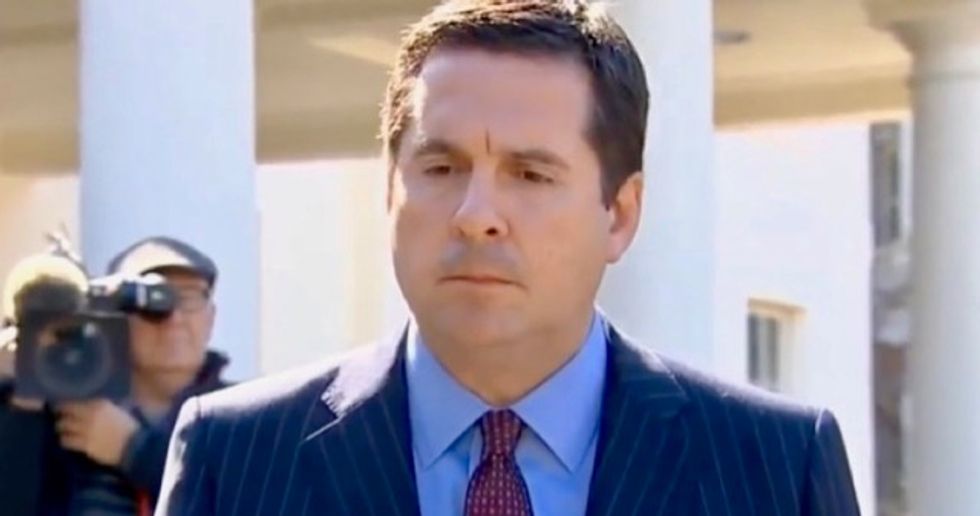 As journalists and legal experts wade through the 17-plus pages of the executive summary and the 300 pages of the full House Intelligence Committee report released Tuesday afternoon, it's increasingly clear the report is quite damning for the President – which we already knew – and for that committee's Republican Ranking Member and former chairman, Devin Nunes, who is mentioned at least 48 times in the report.

Nunes over the past few years has led the charge to defend President Trump, from a late-night visit to the White House to obtain what he wrongly claimed was damning evidence of criminal activity surrounding FISA warrant unmasking – to his more recent conspiracy theories, including the lie that Ukraine and not Russia attacked the 2016 U.S. election. There's also his latest lawsuit: after suing an imaginary cow and others, Rep. Nunes is now suing CNN for $435 million.

All that aside, let's look at how the experts are weighing in on just how much "deep, deep trouble" Congressman Nunes may be in, as law professor and former Special Counsel at the Dept. of Defense Ryan Goodman suggests:

Devin Nunes, you should have recused yourself at the outset of the #HIC #ImpeachingHearings. #LetLevSpeak https://t.co/HeG8kFEDwl
— Joseph A. Bondy (@Joseph A. Bondy) 1575404857.0

CNN's Manu Raju says Nunes "could be tied to effort to dig up Biden dirt":

CNN's Jake Tapper points to Nunes' "contacts with Giuliani and others":

Many of the references to @DevinNunes in here are about his contacts with Giuliani and others -- not his role as ra… https://t.co/hQyS4ynwDF
— Jake Tapper (@Jake Tapper) 1575402233.0

Just Security editorial director Kate Brannen points to passages about calls between Nunes and Giuliani and others – including possibly the president – that could also spell big trouble:

There is news in this House Intel report. It contains new evidence of phone calls between Giuliani and Nunes back… https://t.co/yCp8sldHM7
— Kate Brannen (@Kate Brannen) 1575399744.0

There are a crazy number of phone calls between Lev Parnas and Devin Nunes--many of them on April 12, the same day… https://t.co/KT1eRBtXiH
— Brendan Fischer (@Brendan Fischer) 1575409381.0

Republican political strategist Rick Wilson sums up Nunes' actions with one of Giuliani's indicted henchmen in this colorful tweet:

I guess Devin Nunes was too busy suing imaginary cows to mention to the committee but he was having late night "Lov… https://t.co/18EObClt2e
— Rick Wilson (@Rick Wilson) 1575403621.0