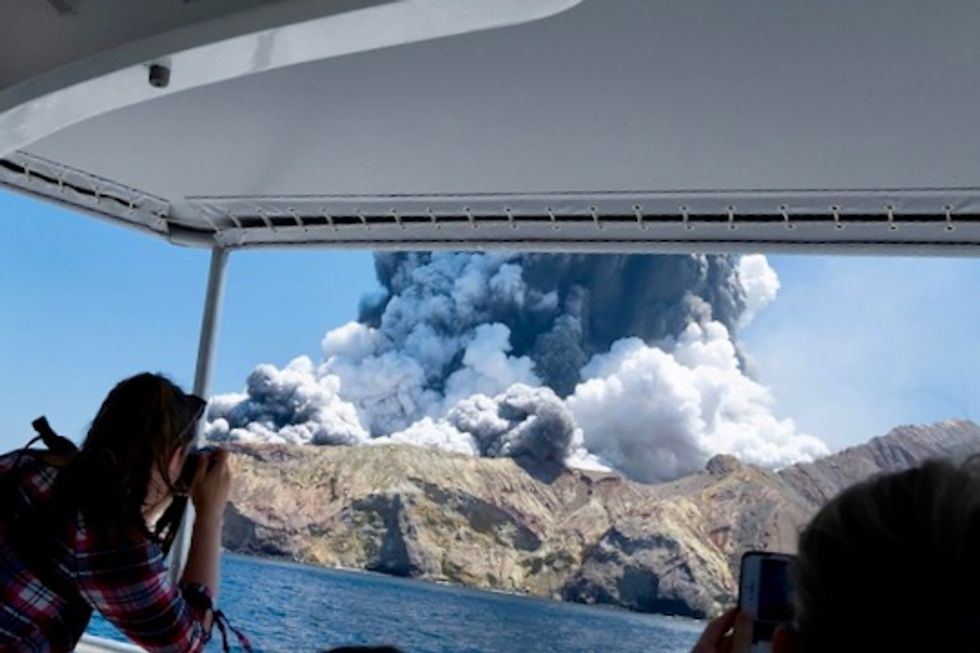 Five people were killed, 18 were injured and several more were left stranded after an island volcano popular with tourists erupted unexpectedly in New Zealand on Monday.

Police said some 50 people were visiting White Island when it exploded suddenly in the early afternoon -- hurling ash and rock high into the air.

Two dozen people made it off the island, five of whom have since died. The rest are being treated for injuries, including severe burns.

Nothing is yet known about a group -- now estimated to number in the double digits -- who are still trapped on the island.

As night fell, he said volcanic activity made a rescue attempt too dangerous.

"The island is unstable, there's a danger of further eruptions, it is physically unsafe for us to return to the island"

"I've got to consider the safety of our people and emergency services staff."

Seconds before, live camera feeds showed a group of more than a half dozen people walking on the crater floor. Then the images went black.

A "considerable number" of those caught up in the disaster are believed to be Australian, according to officials in Canberra.

As many as 30 people are also believed to be cruise passengers on a day trip from the vessel Ovation of the Seas, Kevin O'Sullivan, chief executive officer of industry body the New Zealand Cruise Association told AFP.

The ship's operator Royal Caribbean -- who had billed the trip to White Island as "an unforgettable guided tour of New Zealand's most active volcano" -- said "a number of our guests were touring the island" but did not confirm that number.

The ship has a capacity of around 4,000 people and set sail from Sydney last week on a 12 day voyage.

Tourist Michael Schade, made it off the island just in time and was able to capture footage of the devastation.

His videos showed groups of startled tourists clustered by the shoreline, waiting to be evacuated as the ground around them smouldered, the sky filled with white debris. An ash-caked helicopter lies damaged nearby.

As his ship hurtled away, the caldera became virtually invisible, shrouded by a thick bank of ash.

Volcanic Air said they had landed a helicopter on the island shortly before the eruption carrying four visitors and one pilot. All were now accounted for.

"It had landed on the island. What happened after that we don't know, but we know that all five made it back to Whakatane on one of the tourist boats," a company spokesman told AFP.

Guillaume Calmelet, the co-director of Skydive Tauranga, saw the eruption from above as he took a customer on a tandem skydive from a plane 12,000 feet above the Bay of Plenty.

"As soon as the parachute opened there was this huge cloud that was really different to whatever we've seen before," he told AFP. "I could see it coming out in freefall, so probably about 30 seconds for the whole cloud to form, if that. It was pretty quick."

The country's National Emergency Management Agency described the eruption as "moderate", although the plume of ash was clearly visible from the mainland and from satellites flying overhead.

"We have seen a steady decline in activity since the eruption. There remains significant uncertainty as to future changes but currently, there are no signs of escalation."

AFP/File / TORSTEN BLACKWOOD A file picture of New Zealand's most active volcano, Whakarri (White Island), in the Bay of Plenty

White Island -- - also known as Whakaari -- is about 50 kilometers (30 miles) offshore in the picturesque Bay of Plenty and is popular with adventurous tourists willing to don hard hats and gas masks.

It is New Zealand's most active volcano cone and about 70 percent of it is underwater, according to government-backed agency GeoNet.

Around 10,000 people visit the volcano every year. It has erupted frequently over the last half-century, most recently in 2016.

In August of that year the New Zealand Defense Force airlifted a 2.4-tonne shipping container onto the island to serve as an emergency shelter in case of an eruption.

"Sudden, unheralded eruptions from volcanoes such as White Island can be expected at any time," said University of Auckland volcanologist Shane Cronin.

"The hazards expected from such events are the violent ejection of hot blocks and ash, and formation of 'hurricane-like' currents of wet ash and coarse particles that radiate from the explosion vent."

"These can be deadly in terms of causing impact trauma, burns and respiratory problems. The eruptions are short-lived, but once one occurs, there are high chances for further, generally smaller ones as the system re-equilibrates."