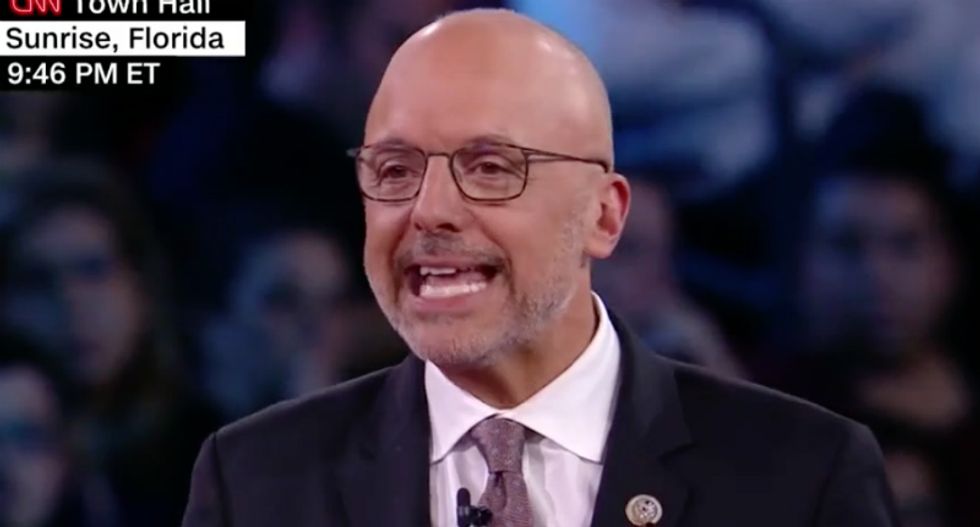 Rep. Ted Deutch (D-FL) said during a passionate speech in the Judiciary Committee to explain the basic logic that shows the rationale for President Donald Trump's impeachment charges.

The Congressman explained that he has a family group-text where he speaks to his children while he's in Washington. He asked his children what they worry about

"They told me what they were feeling. and what their friends were feeling," he described. "And they confirmed the worst. Their faith in our democracy is shaken. One of my kids said, 'Trump has made me feel like our country is failing. He has taken away America's common sense.' Another said, 'If our democracy is fragile enough to be manipulated by the president, then I worry for our future as a country.' Why is our democracy so fragile? Well, the president smears the press as the enemy of the people. He attacks verifiable facts and calls them fake news. He attacks his opponents in the ugliest and the most hateful ways."

He went on to cite the examples of Trump degrading diplomats, questioning the patriotism of those who fought on battlefields when he dodged the draft.

"The president's ongoing attacks on the 2020 elections and his effort to cover it up, that is why we are here tonight," he said. "The president's abuses of power to cheat America's voters and threaten our national security -- he welcomed Russian interference in the 2016 election. He solicited interference by Ukraine and by China in our 2020 election. The ongoing pattern of this president's abuse of power, his obstruction of investigations -- refusing to turn over even one document. That's what requires us to act now."

But it was the basic logic every child learns that Deutch used to make the argument against Trump's obstruction of justice.

"When my kids were younger we taught them to tell the truth," he continued. "We all teach our kids to tell the truth. If you have nothing to hide, honesty is the clearest path to putting trouble behind you. You know that's true. Everyone does. If the president had not abused his power, if everything he did was truly perfect, he would have asked -- no he would have demanded that everyone who works for him come forward and tell the truth, and bring all of their documents with them. Let them speak. Let them all speak. But instead of ordering his staff, to tell the truth, he silenced them. What message does that send the next generation of American voters? The next generation of American leaders?"

The New York Times editorial board asked the same question in an op-ed this week, wondering if Trump has nothing to hide, why then is he refusing to comply with the investigation.

Watch his full speech below: